Sister Mary Catherine used her artistic abilities in several ways to bring joy to others. 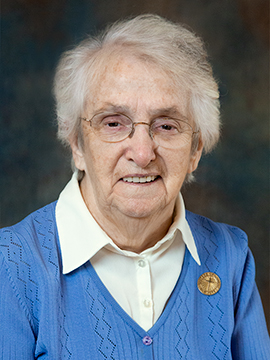 During Sister Richard’s first fourteen years of ministry, she taught at Saints Peter and Paul, Bronx; Sacred Heart, Saint Joseph School and Saint Joseph Academy, Manhattan; Resurrection, Rye; and Holy Cross Academy, Manhattan. In February 1967, Sister Richard was granted an Indult of Exclaustration from the Congregation. As a laywoman, she continued her work as a teacher of young children and an artist; she married and was widowed.

In 2003, the Sisters of Charity of New York accepted Mary Catherine’s request to return, and in November 2006, she professed final vows in the Congregation. From then until 2019, Sister Mary Catherine lived at Sunnyside Drive, Yonkers, and Mount Saint Vincent Convent. She offered volunteer services in the Development Office at Sisters of Charity Center, Convent of Mary the Queen, and Mount Saint Vincent Convent. In late 2019, Sister Mary Catherine moved to Cabrini of Westchester in Dobbs Ferry, where she died on Holy Saturday, April 11, 2020.

Sister Mary Catherine used her artistic abilities in several ways to bring joy to others. She was a dressmaker for American Girl Place in New York, a crocheter of always-in-demand and finely designed baby outfits, and a photographer of family homes, which she later reproduced as oil paintings for the owners. She, and the other retired sisters of Mount Saint Vincent Convent, particularly enjoyed the art classes she offered them.

We rejoice with you now, Sister Mary Catherine, as you are welcomed into the peace and joy of the Resurrection. Well done, good and faithful servant.