She was kind, patient and caring with everyone whom she met, and no request was ever too much for her to accomplish. 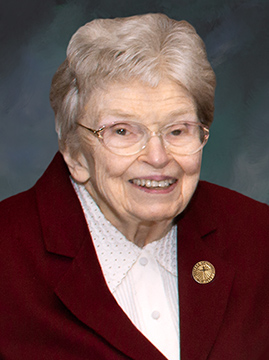 Sister Marion Hunt (Sister Michael Mary) was born March 23, 1923, in New York City, one of two daughters born to Michael and Catherine Flatley Hunt. Marion graduated from Ascension School, Blessed Sacrament High School, and attended Hunter College for two years, all in Manhattan, before entering the Sisters of Charity of New York September 8, 1944. Her sister Catherine, Sister Mary Finnbarr, who joined her in the Congregation in 1956, passed away in 2003. Sister Michael Mary completed her BA in English at the College of Mount Saint Vincent, Bronx, her MA in Philosophy at Fordham University, New York, and earned her PhD in Philosophy at Catholic University of America, Washington, D.C.

Sister Marion began her forty-seven years of ministry in education at Saints Peter and Paul, Bronx, and Saint Francis of Assisi, Mount Kisco. In 1953, she was missioned to Cathedral High School, Manhattan, where she taught English and Religion for nine years. In 1962, Sister Marion began teaching at the College of Mount Saint Vincent as an Instructor and retired in 1993 as a Professor of Philosophy. After her retirement from teaching, Sister Marion continued to enrich the college for the next ten years by developing the Center for Professional Ethics. During the next fifteen years, Sister Marion volunteered as an English language teacher in the Head Start Program for Parents and then at the Sisters of Charity Multi-Service Center, both in Yonkers. She also maintained the Resource Center at the Sisters of Charity Center. In 2008, Sister Marion joined the community at Mount Saint Vincent Convent and, in 2018, moved to Cabrini of Westchester, Dobbs Ferry, remaining there until her death on December 14, 2019.

During her years as teacher and chairperson of the Philosophy Department at the College, Sister Marion inspired students and faculty members alike, not only by the high level of her scholarship but by her ability to present complex and challenging concepts in a style and language that made them completely comprehensible. She was kind, patient and caring with everyone whom she met, and no request was ever too much for her to accomplish. It was Sister Marion’s style to contribute quietly to the many committees, boards and creative working groups of which she was a member. Those with whom she worked and lived were aware of the quality of her contribution which were made with penetrating intelligence, cheerfulness, and a deeply loving and joyful heart. She enjoyed quoting favorite writers and inspiring philosophers like Gerard Manley Hopkins, S.J., and Pierre Teilhard de Chardin, S.J., who wrote, “Joy is the infallible sign of the presence of God.”

We rejoice with Sister Marion as she is welcomed home by her sister, Catherine, Sisters of Charity, family members, and all the saints. Rest in the loving arms of Jesus, Sister Marion.