“You often wonder after taking care of so many children, how they turn out. Then you see the good people they become and it gives you a good feeling.“ 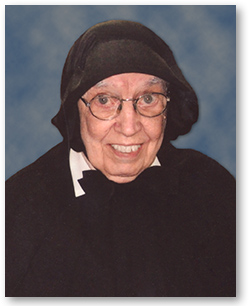 Sister Marilda Joseph (Theresa) was born on August 15, 1916 in New York City. She was one of five daughters of William and Helen Collins Aeillo. Theresa attended P.S. 70 in Astoria, Queens, Bryant High School in Long Island City, and Saint John’s Baby Hospital Nursing Program before entering the Sisters of Charity on February 2, 1943.

Sister Marilda’s first and only mission was the New York Foundling Hospital. She ministered here in many capacities over the course of more than sixty years. In 1945 she was the Supervisor of the Nursery and developed a very successful program for children at Saint Joseph-by-the-Sea in Staten Island. She also supervised the units called Saint Ann’s 7 and 8. She was then given the mammoth job of supervising the Purchasing Department, after which she became the Director of Plant Operations. Sister Marilda’s many talents were put to excellent use as she lovingly served in the many departments to which she was assigned. From 1997 to 2006, Sister Marilda was the archivist for the New York Foundling. She carefully organized the records of the institution she knew and loved so well. 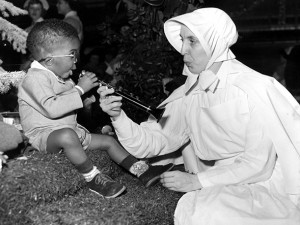 Sister Marilda enjoyed all her work, but most especially supervising the children who were under her care. Her face was a vision of joy when she would visit the handicapped children. She would tenderly hold them and whisper her words of love. In 2006, Sister Marilda retired to the Convent of Mary the Queen where she engaged in the ministry of prayer, service and witness.

In an interview with Catholic New York Sister Marilda said, “You often wonder after taking care of so many children, how they turn out. Then you see the good people they become and it gives you a good feeling.” There are many of Sister Marilda Joseph’s former children who remember her with love and gratitude, as do all who knew her at the New York Foundling Hospital.

May you rest in peace, Sister Marilda, as you bask in the beauty of God’s light.