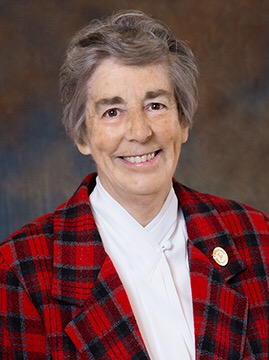 Sister Marie John Jimenez (Thelma Judith) was born February 4, 1932 in Mayaguez, Puerto Rico, one of two daughters of Judith Mora and René Jimenez. Thelma attended Saint Catherine of Genoa Elementary School and Cathedral High School, both in Manhattan. She attended Fordham University for one year and worked for a year before entering the Sisters of Charity of New York on September 8, 1951. Sister John earned a BA in Spanish from the College of Mount Saint Vincent, an MA in Spanish from Hunter College, and a Doctor of Arts in Spanish from Catholic University of America. She also earned Certification for teaching Spanish from New York State.

Sister John’s forty-three years of teaching ministry spanned elementary school through college. She began at Saint Athanasius in the Bronx and then moved to Saint Stephen in Manhattan for elementary education. She followed this with eight years of teaching Spanish in high school at Blessed Sacrament, Manhattan, Saint Joseph by the Sea, Staten Island, and Cardinal Spellman, Bronx. The next twenty-eight years were devoted to teaching Spanish at the College of Mount Saint Vincent. After retiring from teaching, Sister John continued her services in the Business Office and the Facilities Management Department of the College. She later volunteered as a translator at the Family Health Center of Saint Joseph Medical Center, Yonkers, and offered services to the retired sisters in Mount Saint Vincent Convent. When her health declined, she joined the sisters in the retirement community at Cabrini of Westchester in Dobbs Ferry, NY.

Sister John cherished her years as part of the community of the College of Mount Saint Vincent and devoted many hours of outstanding work to add to the beauty of the grounds. She turned various sections and pockets into colorful gardens through her “Pennies for Petals” collections, and her perennial plantings still return each year. She created one special section on the campus near the grotto and named it “Lily’s Garden” in honor of her sister who died October 1998.

We rejoice with Sister John now as she is welcomed by our loving God who greets her, “Welcome home, my good and faithful servant.”

Leave a Reply to Maureen B Russell Cancel reply