Students remember her as a thorough and tireless teacher who empowered them to do their best and who ‘​made math make sense.’ 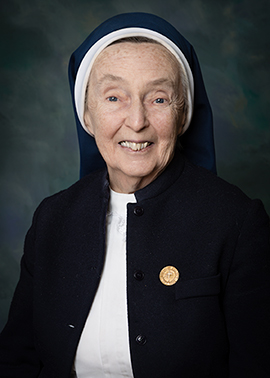 Sister Marie Irene Breheny (Marie) was born August 15, 1927, in Ossining, New York. She was one of three children, one daughter and two sons, born to John and Cecilia Lyons Breheny. Marie attended Our Lady of Victory School in Mount Vernon, Saint Barnabas High School, Bronx, and the College of Mount Saint Vincent for two years before entering the Sisters of Charity of New York on February 2, 1948.

Sister Irene’s fifty-five years of active ministry were spent on all levels of education. Her first ten years of teaching were at Saint Joseph School and Saint Lawrence Academy, both in Manhattan. In 1960, she was missioned to Elizabeth Seton (High) School, Yonkers. These four years were followed by forty-one years teaching mathematics on the college level: twenty-five years at Elizabeth Seton College and sixteen additional years after Elizabeth Seton College became part of Iona College. During these years, Sister Irene also volunteered her time to assist college-bound students, and taught adults attending college in the Malcolm King Harlem College Extension program.

When Sister Irene retired in 2005, she volunteered as a math tutor at Saint Barnabas High School and Saints Peter and Paul Elementary in Mount Vernon. In 2010, she moved to the Convent of Mary the Queen in Yonkers with her good friend Sister Marian Margaret Sullivan (deceased 2015), and in 2014 joined the retirement community at Kittay Senior Apartments, Bronx. Sister Irene died at Kittay on February 5, 2020.

Sister Irene was as devoted to her Breheny clan as each one of them was to her. All who knew her remember her as a loyal friend and a lover of her Irish heritage. She had an irrepressible sense of humor and greeted everyone with a warm smile. Students remember her as a thorough and tireless teacher who empowered them to do their best and who “made math make sense.”
We rejoice with her now as she is welcomed home into eternal peace and happiness by the God whom she served so long and so well. Rest in peace, Sister Marie Irene.