“She used her summers to volunteer in Saint Agatha Home, Nanuet. There she bonded with many children who looked forward to her return each year.” 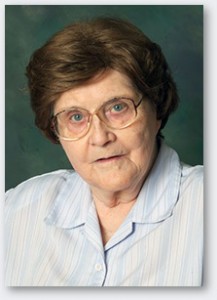 Sister Marie Dolorosa Henn (Marianne) was born on January 27, 1930 in Manhattan, one of four daughters and four sons of Harry and Ann Walsh Henn. Marianne attended the Academy of the Sacred Heart of Mary Elementary School and Saint Michael High School in Manhattan. She then worked as an operator for the New York Telephone Company. Marianne entered the Sisters of Charity of New York on February 2, 1949, and was given the religious name, Sister Marie Dolorosa. She received a BA in History from the College of Mount Saint Vincent, an MA in Guidance from Lehman College and New York State permanent certification in Guidance and Counseling.

Sister Dolorosa’s first ministry was elementary education. She taught in Saint Paul, Saint Mary, Our Lady of Good Counsel, Saint Joseph, Sacred Heart, and Saint Patrick Schools, all in Manhattan, as well as Saint Gabriel Elementary School in New Rochelle. She used her summers to volunteer in Saint Agatha Home, Nanuet. There she bonded with many children who looked forward to her return each year. In 1971 she worked as a Group Mother in Saint Mary Home, Brooklyn. This was followed by administrative work at Stuyvesant Private School and then at Incarnation School.

In 1980 Sister Dolorosa went to her longest ministry, Saint Peter parish in Liberty, New York, where she stayed for seventeen years, teaching Grade 8 as well as serving in many parish activities, including religious education. Upon her retirement, the Rosary Society held a farewell tea in her honor. A local Sullivan County paper reported that “a crowded room of students, parishioners and friends joined together saying their heartfelt goodbyes.”

In 1997, Sister Dolorosa retired to the Convent of Mary the Queen where she became a familiar face at the switchboard, as well as coordinator of many services. Residents and staff awaited her creative weekly calendars. We rejoice with Sister Marie Dolorosa now as she meets her loving God whom she served so well.