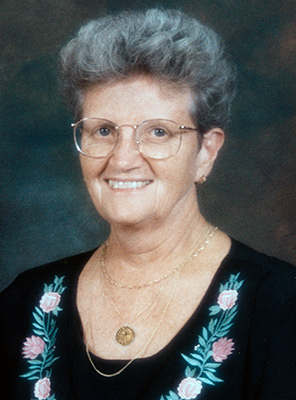 Sister Marianne Robertson (Sister Marian Dominic) was born December 28, 1931, in Yonkers, NY, one of four children—three boys and one girl—of Harold and Margaret Duffy Robertson. Marianne attended Saint Denis Elementary School, Sacred Heart High School, both in Yonkers, and the College of Mount Saint Vincent School of Nursing, earning a BS in Nursing. After graduation, Marianne worked for six months as a staff nurse at Saint Vincent’s Hospital, Harrison, NY, before entering the Sisters of Charity of New York on February 2, 1954. In 1965, Sister received an MS in Medical/Surgical Nursing from New York University.

At the time of her retirement from Saint Vincent’s Hospital, Sister Marianne said, “Every time there is a natural or man-made emergency, the staff seems to rise to the occasion. That’s proof that our mission is alive and well. It’s really an honor and a pleasure to work with a staff who exemplifies the mission and heritage of those who preceded us.” Clearly, Sister Marianne recognized the goodness in God’s people.

We rejoice with her now as she is welcomed home by our loving God and family, friends and Sisters of Charity who have gone before her. Be at peace, Sister Marianne.