“She was creative, practical, soft-spoken and had a quick wit.” 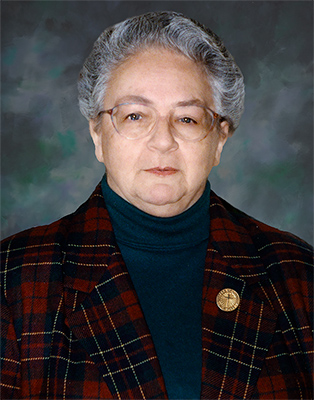 Sister Marian Mercedes Bishop (Mary Margaret) was born April 1, 1936 in White Plains, New York. She was the daughter of Dudley Hart and Marguerite Sheldon Bishop. Mary Margaret attended Cathedral School in Baltimore, MD, Saint John the Evangelist Elementary School and Saint John the Evangelist High School in White Plains. She attended the College of Mount Saint Vincent for one year before entering the Sisters of Charity of New York on September 8, 1954. Sister Marian Mercedes received her BA in Math from the College of Mount Saint Vincent and her MS in Elementary Education from Fordham University. She later earned New York State permanent certification in Nursery–grade 6 and Math, grades 7–9.

Sister Marian’s first ministry was elementary education. She taught in Blessed Sacrament School and Immaculate Conception School, both on Staten Island. She also taught in Immaculate Conception School, Manhattan, Resurrection School, Rye, and Saint Barnabas School, Bronx. In 1971, Sister Marian worked in Saint Anthony Rectory in Yonkers, taught for one year in the parish school, followed by a year of teaching in Saint John the Evangelist School in White Plains. In 1974, Sister Marian began her work for America Press as Fulfillment Director, Subscription and Circulation Manager. After nine years, she returned to the ministry of education as the Assistant Director at Queen’s Daughters Day Care Center in Yonkers, and then as Assistant Principal and Principal at Saint Paul School, Harlem. Upon her return from a year’s sabbatical, Sister Marian worked with the Franciscan Friars as an Executive Secretary and then as Office Coordinator until 2008. For one year she applied her skills in Immaculate Conception School, Manhattan, as the Secretary and Accountant. For the next five years, Sister Marian volunteered in the Finance Office at Mount Saint Vincent Convent. In 2014, she moved to the Convent of Mary the Queen and, from there, later formed a retirement community with a group of sisters at the Jewish Home Lifecare Assisted Living program. When her illness became more complex, Sister Marian moved to Kittay House in the Bronx.

An excellent teacher and a talented person, Sister Marian will be remembered by the students she taught and her colleagues in the various positions she held. She was creative, practical, soft-spoken and had a quick wit. We rejoice with her as she is welcomed into the kingdom by our loving God, her family, friends and Sisters of Charity who have gone before her.

Mass of Christian Burial for Sister Marian will be video streamed from Mount Saint Vincent Convent at 10:00 am on Saturday, April 14, 2018. Please click on the link below if you wish to join us: