“Sister Margaret is known for her love of learning, of books, and of all things Irish.“ 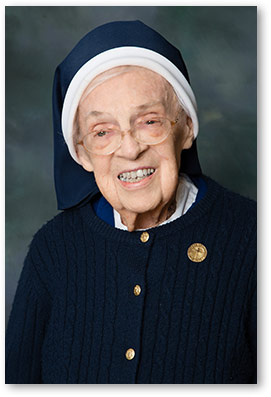 Sister Marian Margaret Sullivan (Mary) was born on May 14, 1921 on Staten Island, one of two daughters of Michael and Margaret Mahoney Sullivan. Mary attended Holy Trinity School and Blessed Sacrament High School, both in Manhattan, before entering the Sisters of Charity of New York on February 1, 1941. Sister Marian Margaret earned a BS in History from the College of Mount Saint Vincent and an MLS in Library Science from Saint John’s University. She later gained NYS Permanent Certification as a Library Media Specialist.

Sister Margaret began her ministry in education as a teacher of seventh grade in Saint Augustine School in the Bronx. She continued to teach at the junior high level in Saints Peter and Paul School (Bronx) and Ascension School (Manhattan). In 1960 she was missioned to Blessed Sacrament High School (Manhattan) where in addition to her teaching duties, she began her long service as a librarian. Sister Margaret was assigned to Elizabeth Seton College in 1964 (Yonkers), where she served as Librarian until 1989 when the college was purchased and became known as the Elizabeth Seton Campus of Iona College. In 1993, Sister became Librarian on the Iona Campus in New Rochelle where she continued until her retirement. Upon retiring from active ministry, Sister Margaret volunteered in the Iona College Library until 2005, and at the library at St. Barnabas High School (Bronx) until 2007.

Sister Margaret was known for her love of learning, of books, and of all things Irish. Students remember her as very kind and helpful during their many visits to the library. Sister’s generosity and compassion extended to the years she lived at the Convent of Mary the Queen and later at Kittay House. She enjoyed the company of the Sisters at the Queen, especially her close friend Sister Marie Irene Breheny, and was always overjoyed to receive letters and visits from former students.

We rejoice with her now as she enters the peace and joy of the Kingdom and is reunited with her family and all of the Sisters of Charity who have gone before her. Be at peace, Sister Margaret.