“She never missed an opportunity to guide youth in systematic thinking and good judgment.“ 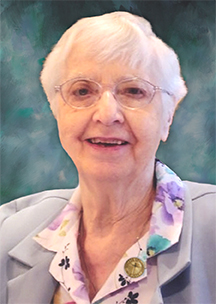 Sister Maria Therese Ruckel (Rita) was born on January 16, 1922 in the Bronx. She was one of three daughters and three sons born to Edward and Laura Lambrecht Ruckel. Rita attended Saint Philip Neri School in the Bronx and Cathedral High School, Manhattan, before entering the Sisters of Charity of New York on September 7, 1940. In 1945 she was joined by her sister Joan (Sister Laura Marie Ruckel, deceased.) Sister Therese received her BS in French from the College of Mount Saint Vincent and her MA in Secondary Education from Fordham University. She also earned NYS Permanent Certification in teaching Biology, Chemistry and General Science.

Sister Therese began her life-long ministry of education by teaching the elementary grades in Sacred Heart and Immaculate Conception Schools, both in Manhattan. She was then sent to Holy Cross Academy, Manhattan, where she remained for eight years. From there she was missioned to the Academy of Mount Saint Vincent, Tuxedo Park in 1961. Sister Therese loved working with the girls at the Academy and was loved by them. The senior high school boarders, whom she supervised each evening, were especially fond of her. Though the Academy closed in 1972, annual alumnae reunions continue to be held in Tuxedo Park, and Sister Therese was a very regular guest for as long as she was able. In 1966 she was sent to the Academy of the Resurrection in Rye, and in 1972 to Saint Raymond Academy, Bronx. Her longest mission was in Saint Joseph by the Sea on Staten Island where Sister served from 1978 until 1997. After over fifty years in education, Sister Therese became the Assistant to the Administrator at Mount Saint Vincent Convent.

Click to view the SILive.com obituary written by a former student of Sr. Therese.

In 2000, Sister Therese retired, but continued to volunteer in various ways. She was particularly in demand for driving the retired sisters to doctors’ appointments and other errands, and to work on the busy switchboard. She had a special gift with young people, and in her retirement years she continued to have contact with students. She judged the Science Fairs in Saint Margaret of Cortona, Visitation and Saint Gabriel Schools, as well as others. She never missed an opportunity to guide youth in systematic thinking and good judgment.

We rejoice with her now as she enters the peace and joy of the Kingdom and is reunited with her family and all the Sisters of Charity who have gone before her. Be at peace, Sister Therese.