Sister Goretti had loves that shaped her life and ministry — the German language, science, the hearing-impaired community, and music, especially the harmonica. 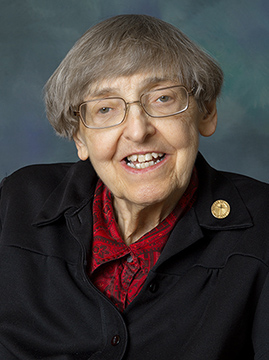 Sister Maria Goretti Wieser (Wilma Barbara) was born June 25, 1931, in Morris Plains, New Jersey. She was the youngest of Anton and Elizabeth Wilfert’s five children, a son and four daughters.

When Wilma was eight, her mother took her and two other sisters to visit Germany before World War II began. Since the family needed to remain there, she attended schools in Eichendorf, Osterhofen, Berlin, and Goeppingen for grades three through eight. After they returned to the United States, Wilma attended high school at Holy Cross Academy in New York and then worked for one year before entering the Sisters of Charity of New York on September 8, 1951.

Sister Goretti received a BS in Biology from the College of Mount Saint Vincent, an MA in German Literature from New York University, and an MS in Special Education for the Hearing Impaired from Hunter College. She later earned New York State Permanent Certification in German, the Sciences, and Education of the Deaf and Hearing Impaired.

Sister Goretti’s forty-eight years of active ministry were in education on the elementary and high school levels and the specialty area of the hearing impaired. Her sixteen years in elementary grades were at Saint Peter, Staten Island, Saint Agatha, Nanuet, and Saint Stephen and Saint Emeric, both in Manhattan. With her background in the sciences, her German cultural heritage and her gift and love of music, Sister Goretti was assigned to teach these areas in the high schools of Academy of Mount Saint Vincent, Tuxedo Park, New York, Saint Michael, Manhattan, and Cardinal Spellman, the Bronx.

Through the American Association for Teachers of German, Sister Goretti received a one-year appointment to teach English and Biology in Essen, West Germany.

In 1988, she received an MS in the education of the hearing impaired and began twenty-one years of ministry at Saint Joseph’s School for the Deaf in the Bronx.

In 2011, Sister Goretti retired to the Convent of Mary the Queen, Yonkers. After three years, she joined the retired community at Kittay Senior Apartments at The New Jewish Home in the Bronx. She died there on February 5, 2021.

Sister Goretti had loves that shaped her life and ministry — the German language, science, the hearing-impaired community, and music, especially the harmonica. She taught with a desire to instill in students the value of knowledge and the power of life-long learning. Sister Goretti’s transition to teaching the hearing impaired is best understood as a “yes” to the mystery of God’s movement in her life.

Sister Goretti, we rejoice as you now enter the fullness of faith in God’s plan of salvation. Sei in Frieden in dem Gott, dessen Name Liebe ist. Be at peace in the God whose name is Love.