Early in her community life, when asked how she would like to be remembered, she wrote, “as a caring, prayerful, dedicated woman of service.” 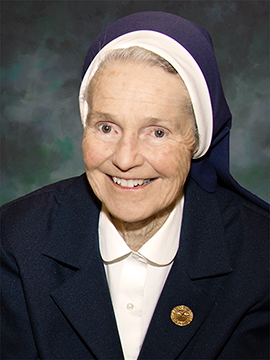 Sister Marguerite’s fifty-eight years of ministry began in childcare at Holy Name Day Nursery in Manhattan, and Saint Joseph Hall in Brooklyn. Her next thirty-six years of ministry were as a primary grade teacher in several schools. In the upper counties of New York State, she taught at Saint Francis of Assisi, Mount Kisco; Saint Mary, Wappingers Falls; Saint Mary of the Snow, Saugerties; and Resurrection, Rye. She also taught at Our Lady of the Angelus, Rego Park, and Saint Patrick, Manhattan. In addition, she served for several years on Staten Island at Blessed Sacrament,  Immaculate Conception, and Saint Peter schools.

In 2004, Sister Marguerite turned to a new area of ministry when she volunteered with Sister Mary Richard Rowley for eight years as a Pastoral Minister in Saint Sebastian Church, Fort Lauderdale, Florida. Sister Marguerite returned to New York in 2012 to join the retirement community at Mount Saint Vincent Convent, the Bronx, and later moved to Cabrini of Westchester, Dobbs Ferry. She died at the Hospital for Special Surgery in Manhattan on May 5, 2020.

Sister Marguerite treasured the experiences the weeks after 9/11 when she and Sister Mary Richard ministered to the heartbroken people of Staten Island who lost loved ones in the Twin Towers. For weeks, each day after school, they went to a shrine erected by the people near their convent home with a view of the World Trade Center site. There they listened to and consoled the people, brought food, and other needed supplies. They knew their presence gave strength and courage to those who mourned.

Early in her community life, when asked how she would like to be remembered, she wrote, “as a caring, prayerful, dedicated woman of service.” Sister Marguerite’s participation in the sacramental life of the Church, years of ministry involvement with children and families, the presence of family and friends for her, and the challenges presented as her health failed, truly portray her devoted spirit. Be at peace, Sister Marguerite, as you go home to the God you served so well as a Sister of Charity of New York for sixty-one years.