“She touched the lives of thousands of students, parents and teachers with her patience, concern and example.” 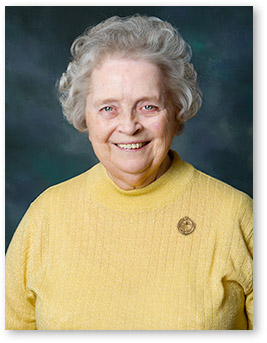 Sister Margaret Taylor (Sister Edwin Regina) was born on May 12, 1931 in Mount Vernon, New York, one of two daughters and two sons of Edward and Bridget Griffin Taylor. Margaret attended Resurrection School, in Rye, and Saint Gabriel High School, in New Rochelle, before entering the Sisters of Charity of New York on September 8, 1950. Sister Edwin received a BA in Latin from the College of Mount Saint Vincent and an MED in Reading from Boston College. She later earned NYS Permanent Certification in Administration and Supervision

Sister Margaret’s first mission was teaching second grade at Holy Name School in Manhattan. She continued her ministry in elementary education at Saint John Evangelist, White Plains; Immaculate Heart of Mary, Scarsdale; Immaculate Conception, Manhattan; and Saint Mary of the Snow, Saugerties. She served as principal at Saint Mary of the Snow from 1969 until 1996. Sister Margaret then taught at Saint Denis and Sacred Heart Schools, both in Yonkers. Sister retired from teaching in 2000, but continued her active involvement in many volunteer activities.

After Sister Margaret’s many years in Saugerties, a local paper was quoted as saying, “She was a pioneer in education, giving support to many new concepts. She touched the lives of thousands of students, parents and teachers with her patience, concern and example.” Sister Margaret will long be remembered for her kindness and compassion by all those whose lives she touched during her many years as a Sister of Charity. While in residence at the Convent of Mary the Queen, Sister Margaret greeted all whom she met with gentle kindness and a cheerful smile. She loved her family and friends, her ministry in education and her Community

We rejoice with her now as she enters into the loving presence of our God where she has been warmly greeted. Be at peace, Sister Margaret.