Along with her active life, Sister Margaret made quiet prayer in the presence of God a priority. 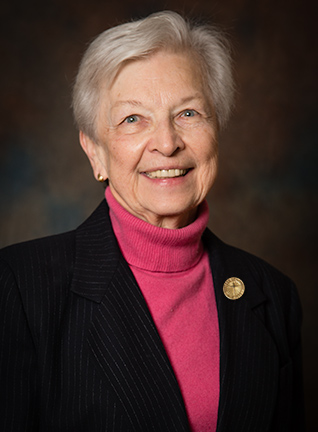 Sister Margaret E. Angelovich (Sister Regina Margaret) was born March 15, 1936, in Yonkers, NY, one of two children, a daughter and son of Stephen and Anna Gimera Angelovich. Margaret attended Saint Mary School, Yonkers, Saint John the Evangelist High School, White Plains, and Hunter College in Manhattan for one year before entering the Sisters of Charity of New York on September 8, 1955. Sister Regina Margaret received a BA in History from the College of Mount Saint Vincent, an MA in American History from Catholic University in Washington, DC, and an MA in Theology from Fordham University. She was certified as a spiritual director through the Center for Spirituality of the Archdiocese of New York.

Sister Margaret’s primary ministry was in the field of education. Her early missions were Saint Mary School, Staten Island, and Saint Barnabas Elementary School, Bronx. She was then missioned to Bishop McDonnell High School in Brooklyn where she taught history for five years. In 1970, Sister Margaret became the principal of Saint Paul the Apostle School, Manhattan, for four years before serving as a Pastoral Associate in the parish. In 1980, she became the Director of Special Programs at the College of Mount Saint Vincent until she was appointed the Vocations/Pre-Admission Director for the Sisters of Charity, a position she held for six years. In 1989, Sister Margaret returned to education as a Guidance Counselor at Saint Raymond Academy, Bronx, and then became a mentor in the Fordham University Education Fellowship program. She completed her years of active ministry as an adult spirituality educator in the Bronx and Westchester. In 2012, Sister Margaret retired and moved to Mount Saint Vincent Convent where she remained active with the Sisters and enjoyed a variety of outside interests. It is here she died on March 19, 2019.

Sister Margaret will be remembered as a kind and generous person who loved her family, her ministry in education for children and adults, and her sisters in community. One could always count on her for an informative and enjoyable conversation, a bright smile, and a few good laughs. Along with her active life, Sister Margaret made quiet prayer in the presence of God a priority.

May you feel warmly welcomed, Sister Margaret, in the arms of your loving God whom you served so well as a Sister of Charity. Rest in peace in the company of your family, friends, and the Sisters of Charity who have preceded you.