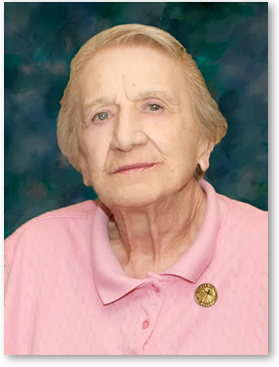 “All who knew Sister Alphonse were keenly aware that her demeanor belied the humorous, kind, and caring individual who never hesitated to extend herself for others.”

Sister Loretto Alphonse Clark (Marion) was born on September 12, 1925 on Staten Island, one of three daughters of Frederick and Catherine Whalen Clark. Marion attended P.S. 22, Saint Peter High School for Girls, and Wagner College —all on Staten Island— before entering the Sisters of Charity of New York on September 8, 1946. Sister Loretto Alphonse earned a BS in Chemistry from the College of Mount Saint Vincent and an MED in Science from the University of Maryland. She was also a doctoral candidate in Science Education at the University of Maryland, and later earned her New York State Permanent Certification in Math, General Science and Chemistry.

Sister Alphonse’s first mission was as a group mother at Saint Agatha Home in Nanuet, but most of her years of active ministry were spent in education. She taught elementary school for fifteen years in the following schools: Saint John Evangelist, White Plains; Our Lady of Angels and Visitation, Bronx; Saint Mary, Staten Island; Sacred Heart and Saint Patrick, Manhattan. Sister Alphonse then became the Chairperson of the Math and Science Department at Holy Cross Academy, Manhattan. After two years of full-time study, she became the Chairperson of the Science Department at Saint Gabriel High School, New Rochelle. In 1985, Sister Loretto Alphonse went to the College of Mount Saint Vincent, first as Assistant and then as Registrar. She also taught classes in computer skills, a task at which she excelled and particularly enjoyed.  In 1997, Sister Alphonse was named the Administrator of the Convent of Mary the Ocean Star in Ventnor, New Jersey. Here she provided hospitality, excellent cooking, and expert housekeeping for vacationing sisters and friends. After the closing of Ventnor, Sister Alphonse went to Saint Joseph Convent in Yonkers as the housekeeper and did volunteer service at the Convent of Mary the Queen.

In 2011, Sister Loretto Alphonse retired to the Convent of Mary the Queen where she kept very busy with her voluminous reading, her discussions with the sisters, and her attendance at all of the events held there. All who knew Sister Alphonse were keenly aware that her demeanor belied the humorous, kind, and caring individual who never hesitated to extend herself for others. While poor health slowed her down, it never kept her from achieving what she needed and wanted to accomplish.