“Those students whom she taught or counseled found her to be an enthusiastic teacher and a good listener.” 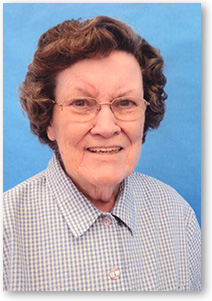 Sister Kathleen Gregg (Sister Michael Marie) was born in New York City on August 15, 1931. Her parents, Michael and Catherine Egan Gregg, had two daughters and one son. Kathleen attended Saint Francis School and Cathedral High School, and briefly worked as an accountant, before entering the Sisters of Charity of New York on February 2, 1950. She was given the name Sister Michael Marie, and earned a B.A. in Mathematics from the College of Mount Saint Vincent and an M.A. in Guidance from Fordham University.

Sister Kathleen began her ministry in education at Saint Raymond School, Bronx, where she taught in the elementary grades. From here she moved into secondary school as a guidance counselor at Saint Gabriel High School, New Rochelle, and then Saint Joseph-by-the-Sea High School, Staten Island. In 1973 she became Education Director at the Kennedy Home, and later at the Westchester School for Special Children in Yonkers. She was also a specialist in Process Facilitation and a consultant with the College of Mount Saint Vincent, the College of New Rochelle and Manhattan College. In 1995 she volunteered as a guidance counselor in Saint Mary School, Yonkers where she assisted many students.

From 1968, and continuing throughout the years of renewal, Sr. Kathleen worked with Father George Wilson, S.J., to organize the Association of Contemplative Sisters and helped advise groups regarding the changes of Vatican II. She was also very involved with various groups in our Congregation around small group dialogue, and the administration of the Myers-Briggs Personality Indicator.

Sister Kathleen was a kind, compassionate, empathetic and understanding person. Those students whom she taught or counseled found her to be an enthusiastic teacher and a good listener. In her dealings with people of all ages she was well respected and her expertise was evident. In her retirement at Mary the Queen, she was known for her kind and cheerful manner with all whom she met.

We rejoice with Kathleen as she is welcomed into the warm embrace of the God she served so well. Rest in peace, Sister Kathleen.