“No matter where she went she brought warmth, compassion, and kindness to those whom she served.” 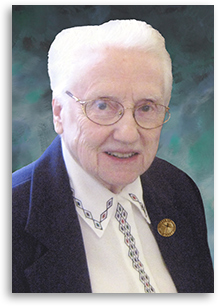 Sister Kathleen Hanrahan (Sister Miriam Francis) was born in Jersey City on September 7, 1920, the only daughter of three children born to Daniel and Mary Ruddy Hanrahan. Kathleen attended public schools in New Jersey before attending Cathedral High School and Hunter College in New York City. She entered the Sisters of Charity of New York on September 8, 1938. Sister Francis earned a BA in English from the College of Mount Saint Vincent, an MA in English from Saint John’s University, and an MS in Education from Iona College.

During her more than sixty years of active ministry, Sister Kathleen fulfilled a wide variety of roles, bringing her many talents to each. She began her ministry in the field of education where she taught at Saint Peter School in Poughkeepsie, Saint Peter School in Brooklyn, and Saint Stephen School in Manhattan. She then became principal at Saint Mary School in Wappingers Falls and later at Saint John Vianney School in the Bronx. From 1960 through 1968 Sister Kathleen was the Director of Novices and Head of the Formation Program for the Sisters of Charity of New York. After this she worked for one year in the Family Consultation Services of the Archdiocese of New York. From 1973 until 1978 Sister worked at Saint Joseph Hospital, Yonkers, as a ward clerk, an administrative assistant, and in the Family Health Center.

Sister Kathleen held various positions in congregation ministry over the course of the next several years. She was the Coordinator for the Renewal Education Program, then the Retirement Director. She became the Assistant to the President during Sister Agnes Connolly’s two terms in office from 1979 until 1987. In 1987 she returned to Saint Joseph’s Hospital to work as a patient representative in the emergency room area. She once described her role as, “We get many needy people here, physically needy or spiritually needy, as well as economically needy. My job is a positive effort to show respect for them, and to show them we value their lives.”

Sister Kathleen loved her family and her community. She valued her friendships and the Sisters with whom she lived. No matter where she went she brought warmth, compassion, and kindness to those whom she served. During her days at Mary the Queen she always greeted everyone with a bright smile. Sister Kathleen was among the first group of our sisters to move to Saint Patrick’s Nursing Home in the Bronx.

We rejoice with her now as she joins her family and friends in the place our loving God has prepared for her. The virtues of humility, simplicity, and charity were certainly personified in this faithful and loving Sister of Charity. Rest in the Lord’s peace, Sister Kathleen.