“Sister Kathy was a kind, understanding, and compassionate teacher whose students will long remember the science lessons they learned as well as the gentleness, patience, and love shown to them.” 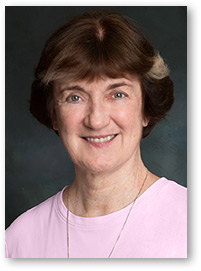 Sister Kathleen Doherty was born on April 1, 1944 in Jersey City, NJ,  the second of three daughters born to John and Margaret O’Connor Doherty. She attended Our Lady of Angels School in Brooklyn and Saint John Villa Academy on Staten Island. Kathy entered the Sisters of Saint John the Baptist on September 1, 1962. She received a BS in Science from Seton Hall University, an MS in Environmental Science from CCNY and an MS in Religious Education from Fordham University.

Most of Sister Kathy’s years of ministry were spent in education where she was known as a very dedicated teacher. As a Sister of Saint John the Baptist, she taught in Saint Bernard School, Plainfield, NJ; Saint Dominic School, Bronx; Saint John Villa Academy, Staten Island; La Salle Academy, Manhattan, and Mount Saint John Academy in Gladstone, NJ. She lived for a year in the Aletheia House of Prayer in New York City and then returned to teaching at La Salle Academy. In 1987, Sister Kathy began the formal process to transfer to the Sisters of Charity of New York and in September 1991, the transfer of her vows was accepted by the Congregation.

Sister Kathy worked with the Little Sisters of the Assumption as Coordinator of the Family Life Program for three years and then returned to teaching science at Iona Prep School, New Rochelle; Cardinal Spellman High School, Bronx; and the Grace Outreach Program, Bronx, and as a tutor for the New York Foundling in Queens and Abraham House in the Bronx.

Sister Kathy was a kind, understanding and compassionate teacher whose students will long remember the science lessons they learned and the gentleness, patience and love shown to them. She went above and beyond to help her students with academic as well as personal problems. She gave herself joyfully to people and to all of creation. Sister Kathy had a deep sense of the presence of God in all things great and small, in our universe, in our planet and in all of life.

Sister Kathy, you are now caught up in the mystery and energy of the cosmos where God’s everlasting love enfolds you forever.

Chapel of the Immaculate Conception
College of Mount Saint Vincent
Tuesday, September 22, 2015
9:00 am

MASS OF THE RESURRECTION
Chapel of the Immaculate Conception
College of Mount Saint Vincent
Tuesday, September 22, 2015, 10:00 am