Sister Joan was the last Sister of Charity to serve in the Bahamas, where she served for forty-one years. 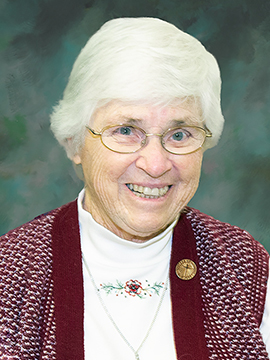 Sister Joan Anderson (Sister Mary Arthur) was born July 29, 1933, in Brooklyn, New York. She was the youngest of four children — two daughters and two sons — of Arthur and Mary Cusack Anderson. Joan attended Saint Cecilia School and Saint Joseph Commercial High School, Brooklyn. She volunteered at Saint Joseph Hall, also in Brooklyn, before entering the Sisters of Charity on September 8, 1952. Sister Joan received a B.A. in History from College of Mount Saint Vincent and an MS in Education from Hunter College. She later earned certification in School Administration/ Supervision from New York State.

In March 1955, Sister Joan was missioned to Saint Agatha, Nanuet, where she served as teacher and group mother until August 1962. For the next academic year, she taught at Saint Mary in Staten Island. In September 1963, she was missioned to Saint Francis, Nassau, Bahamas, where she remained for three years. In 1966, Sister Joan taught at Saint Stephen School, Manhattan, and then at Saint Gabriel School, Bronx, for an additional three years. In September 1969, she returned to Saint Francis, Nassau, Bahamas, and remained in the island nation for thirty-eight years. During this time, she served for twenty-two years as Administrator at Our Lady School in Nassau. In recognition of her service and love for the people of The Bahamas, Archbishop Lawrence A. Burke, SJ, DD, presented Sister Joan with the Pro Ecclesia et Pontifice Cross from Pope John Paul II in Saint Francis Xavier Cathedral in December 1999.

At the request of Archbishop Burke, Sister Joan headed a collaborative effort among the Church, the Bahamian government, and a donor to establish Nazareth Center, a residence for children in need of protective care. She served as the Center’s Administrator from its opening in 2000 until she returned to the United States in November 2007. Sister Joan was the last Sister of Charity to serve in The Bahamas, where she served for forty-one years.

During her eleven years at Mount Saint Vincent Convent, Sister Joan assisted with sisters’ finances, the reception desk, and organized fundraisers to benefit charities, notably the Elizabeth Seton Pediatric Center. She was known for creating beautiful seasonal crocheted and needlework pieces to sell at the fundraisers. In May 2018, she moved to Cabrini of Westchester and remained there until her death on November 27, 2019.

Sister Joan will long be remembered by all whom she taught for her happy spirit, great energy and kindness. When she left Nassau, public tributes to her were abundant. Msgr. Preston Moss, Archdiocese of Nassau, wrote of Sister Joan, “She embodies the Bahamian culture and the Sisters of Charity Congregation virtues of humility, simplicity and charity.”

Throughout her life, Sister Joan walked with grace and dedication in the footsteps of Christ. We rejoice with her now as she is welcomed into the loving arms of God whom she served so well. Be at peace, Sister Joan.

Funeral services will be video streamed from Mount Saint Vincent Convent on Tuesday, December 3, at 10:30 AM. Streaming will include Memory Sharing at 10:30 a.m. and Mass at 11:00 a.m. We invite you to join us by using the link below.
https://venue.streamspot.com/217aa3db

Archdiocese of Nassau, The Bahamas