Her legacy will be her students, me being one of them, carrying on service and dedication to the future of the Church. 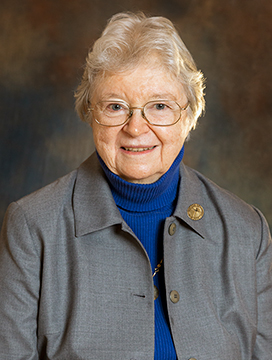 Sister Janet Baxendale (Sister Francis Rosaire) was born September 27, 1937, in Brooklyn, New York, the oldest of three children, one daughter and two sons, of Marion Carlin and Francis Baxendale. Janet attended Glenwood Landing Free School for elementary education and Our Lady of Mercy Academy in Syosset, New York, for high school. She attended the College of Mount Saint Vincent, Bronx, New York, for two years before entering the Sisters of Charity of New York on September 8, 1957.

Sister Janet received a BS in History from the College of Mount Saint Vincent, an MA in History from Manhattan College, the Bronx, and merited New York State permanent certification in social studies. In 1971, she earned an MA in Liturgy from the University of Notre Dame in Indiana.

Sister Janet’s years of ministry span fifty-eight years. She taught two years on the elementary level at Saint Gregory the Great, Harrison, New York, and then became a teacher of religion and history for twelve years at Cardinal Spellman High School, Bronx. The remaining forty-four years of ministry were in the field of Liturgy, an area that defined her as a person and on which she put her singular signature in the Archdiocese of New York and dioceses across the United States. She devoted the first twenty-seven of these years to the Archdiocese of New York, serving Cardinals Terence Cooke, John O’Connor, and Edward Egan. During the same years, she was Adjunct Professor of Liturgy at Saint Joseph Seminary of the Archdiocese of New York and a Professor of Liturgy in the Master’s program of the Institute of Religious Studies of the Archdiocese.

In 1995, Sister Janet was chosen by John Cardinal O’Connor to coordinate the liturgical functions for the visit of Pope Saint John Paul II to New York and, in 2008, served on the Committee for Texts for the visit of Pope Benedict XVI to the United States and wrote the prayer prayed by Pope Benedict at the September 11 site, unique recognitions of her liturgical knowledge and skills.

From 2001 until retirement in 2019, Sister Janet served as liturgical and educational services consultant for dioceses across the country and was appointed consultant to the US Bishops Committee on Divine Worship. In this role, she contributed to the publication of Built of Living Stones, Art, Architecture and Worship, guidelines of the United States Catholic Conference of Bishops for the construction of worship spaces. She worked with several church architectural and liturgical design firms in the building of new church buildings here and abroad, particularly in Italy. A member of one architectural firm commented, when hearing of Sister Janet’s death, “Her legacy will be her students, me being one of them, carrying on service and dedication to the future of the Church.” In 2019, Sister Janet received an award from the Federation of Diocesan Liturgical Commissions in recognition of her outstanding contributions in the field of liturgy. Sister Janet died March 31, 2020, at Cabrini of Westchester in Dobbs Ferry, New York.

Saint Elizabeth Ann Seton reminded the Sisters of Charity to be daughters of the Church. Sister Janet, you truly lived this call by unselfishly sharing your abundant gifts and love of Church with thousands of priests, religious, and laity who serve the Church worldwide. You will be warmly embraced by the God you served so well as a religious for sixty-three years. Rest in peace.