The instruction of Saint Vincent de Paul to render to Christ “every service … in the persons of the poor” motivated the legal support she provided for the children. 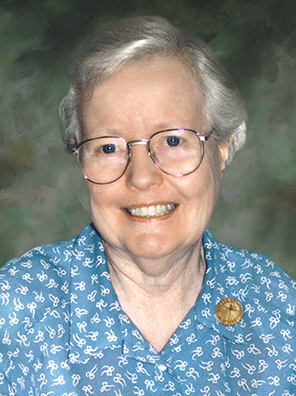 Sister Helen McTaggart, formerly Sister Michael Marian, was born September 26, 1932, in Manhattan, one of two daughters and a son born to Michael and Catherine Walsh McTaggart. Helen graduated Saint Rose of Lima Elementary and Cathedral High School, both in Manhattan, and attended Saint John’s University in Queens for one year before entering the Sisters of Charity on September 8, 1951.

Sister Michael completed her BA in History at the College of Mount Saint Vincent, an MA in European History from Fordham University and earned New York State Permanent Certification in Social Studies Grades 7–12. She later received a JD from Saint John’s University School of Law and was admitted to the New York State Bar in 1978.

Sister Helen divided her fifty-two years of active ministry between classroom teaching, twenty years, and her legal profession, thirty-two years. She taught elementary grades at Saint Charles Borromeo in Brooklyn, and Saint Peter in Staten Island, and was Director of Education at Saint Agatha Home in Nanuet. Her high school assignments were at Bishop McDonnell in Brooklyn, Xavier College and Saint Augustine College in The Bahamas, and Cardinal Spellman High School in the Bronx.

After three years as a full-time law student, Sister Helen provided counsel at Job Development Authority of New York State, Bronx Family Court, Internal Revenue Service, New York City Department of Consumer Affairs, and the Foster Care and Adoption Department of a firm specializing in child welfare law. In 1990, she was appointed attorney part-time for Saint Joseph Services for Children and Families of Brooklyn and developed a private practice.

In 2001, Sister Helen went into private practice full-time until her retirement in 2006. Her first nine years of retirement were at Convent of Mary the Queen in Yonkers. In 2015, she joined the retired Sisters of Charity at Schervier Nursing Care Center in the Bronx, and later moved to Cabrini of Westchester where she died January 28, 2022, in the seventy-first year of commitment as a Sister of Charity.

Sister Helen once noted that it was the needs of the children at Saint Agatha Home that focused her desire to be a lawyer. The instruction of Saint Vincent de Paul to render to Christ “every service … in the persons of the poor” motivated the legal support she provided for the children.

While living at Mary the Queen, Sister Helen delighted in visiting with the other sisters. With her lively sense of humor and gentle nature, her kindness was offered with a cheerful smile and a loving look from her bright blue eyes.

Sister Helen, these last years of your life have been a long journey waiting patiently to meet your God whom you served so well. Those you have assisted in ministry will tell of their gratitude for making their lives better. We who mourn your loss are grateful for your life shared with us.

Diocese of The Bahamas