“A devoted nurse, a kind and understanding person, a gracious and prayerful woman…” 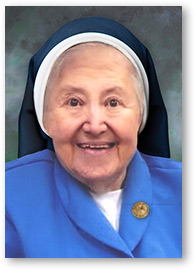 Sister Grayce Megna (Sister Miriam Bernard) was born on September 8, 1926 in Manhattan. She was one of two girls and two boys of Francis and Rose Capria Megna. Grayce attended Saint Frances of Rome School, Bronx, and Cathedral High School, Manhattan. She worked for eleven years before entering the Sisters of Charity of New York on February 2, 1955. Sister Grayce received her certification as a Licensed Practical Nurse, and later her certification in Nursing Home Administration.

Sister Grayce’s lifelong ministry was in the field of healthcare. She spent a short time assisting the senior sisters as they moved into the Convent of Mary the Queen in 1958, and was then sent to the New York Foundling Hospital to work in the accounting department. In 1960, Sister Grayce moved to Saint Vincent Hospital, Manhattan, where she served for one year. She was then transferred to Saint Vincent Medical Center, Staten Island, where she worked as an administrative assistant and nursing supervisor for the next thirty-six years. There Sister Grayce ministered to Mother Loretto Bernard and cared for her almost exclusively during the last two years of her life. Sister Grayce continued her ministry of care and concern at Saint Vincent Medical Center until it closed. In 2007 she moved to Saint Joseph by the Sea Convent where she lived for a year before going to the Convent of Mary the Queen. She lived for the past few months at Saint Cabrini Nursing Home, Dobbs Ferry, where she greeted residents and visitors alike with her cheerful smile.

Sister Grayce, a dedicated nurse, was attentive to the needs of the many people she encountered each day. She knew all of the employees of Saint Vincent Medical Center and cared about each of them and their families. At the celebration of her fiftieth Jubilee, one of the hospital administrators characterized Sister Grayce as the “epitome of the hospital’s core values of respect, integrity, compassion and excellence.”

A devoted nurse, a kind and understanding person, a gracious and prayerful woman — what better way to describe this true Sister of Charity. Rest in the presence of God, Sister Grayce, and be at peace.