Sister Grace was a dynamic teacher who believed that education was the door to a better future for her students, no matter their age, and she dedicated her life to this value. 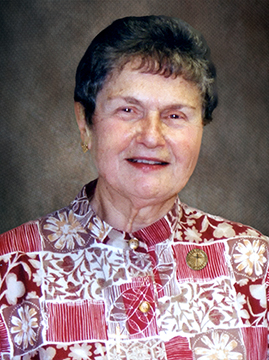 Sister Grace Thérèse Murray (Grace Theresa) was born August 30, 1927, in Atlantic City, New Jersey, one of three children, a daughter and two sons, of Walter and Daisy Mottley Murray.  Grace attended Incarnation School and Cathedral High School, both in Manhattan, and received a BA in French from Hunter College before entering the Sisters of Charity on February 2, 1950.

Sister Grace Thérèse’s fifty-seven years of active ministry were mainly in the field of education. She also served the Congregation for a period as Assistant to the Treasurer. Her thirty-six years of high school teaching were at Holy Cross Academy and Cathedral in Manhattan, Saint Barnabas and Cardinal Spellman in the Bronx, and Trinity in Shiremanstown, Pennsylvania.

In these assignments, Sister Grace taught French, Spanish, and Religion, and at periods served as Chair of the French Department; for two years at Saint Barnabas, she served as Dean of Students and Assistant Principal. She taught Spanish for a semester at the College of Mount Saint Vincent and provided courses for a year in the extension and summer programs of the College.

Sister Grace applied her teaching experience for fifteen years in classrooms and educational programs of school districts in Sullivan County, New York. With her knowledge and fluency in Spanish, she served the Hispanic Community through BOCES and ESL programs, and parish religious education programs; provided home-bound instruction in the Monticello School District and was a classroom teacher in Tri-Valley Middle School in Grahamsville, and Glory to God Christian High School in Liberty.

When Sister Grace retired in 2009, she continued as a volunteer in Monticello schools and prolife center and was recognized in 2012 by Sullivan County for her volunteer contributions. In that year, she went to live at Mount Saint Vincent Convent and in 2016, joined the Congregation’s retirement community at Schervier Nursing Care Center, the Bronx, where she died December 26, 2020. Sister Grace was in her seventy-first year of commitment as a Sister of Charity of New York.

Sister Grace was a dynamic teacher who believed that education was the door to a better future for her students, no matter their age, and she dedicated her life to this value. Her sense of humor, joined with an open and approachable manner, made her many friends.

Sister Grace Thérèse, we rejoice as you are welcomed into the hope of eternal light and joy opened to us by the birth of our Savior, Jesus. May God’s peace, a gift beyond all understanding, be your rest.

The Mass of Christian Burial from December 30 is available for viewing until January 29.
Link: https://venue.streamspot.com/217aa3db