Sister Grace was an excellent teacher and nurse, known for her kindness, compassion, and marvelous sense of humor. 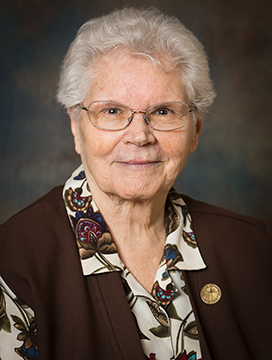 Sister Grace Henke (Sister Mary Adrienne) was born February 24, 1932, in the Bronx, New York, the daughter of Eugene and Frances Adrienne Le Merle Henke. Grace attended Blessed Sacrament School in the Bronx and Cathedral High School, Manhattan, and worked for a year before entering the Sisters of Charity of New York on September 8, 1951. Sister Adrienne received a Nursing Diploma from Saint Vincent Hospital School of Nursing, a BS in Nursing and an MS in Medical/Surgical Nursing from Hunter College and a Doctor of Education in Nursing Research from Columbia University. New York State granted her a permanent Nursing License.

Sister Grace has ministered in the field of nursing and nursing education since she first began her studies at Saint Vincent’s Hospital School of Nursing in 1954. For her first seven years at Saint Vincent’s Hospital, she ministered on the wards as a Student Nurse, Staff Nurse, Assistant Head Nurse and the Relief Night Supervisor. After receiving her nursing degrees, Sister Grace began thirty-six years as an instructor in Saint Vincent’s School of Nursing, teaching topics such as microbiology, anatomy and physiology, and medical physics. She initiated a bioethics course as well as courses in drug therapy and pharmacophysiology, and authored several professional textbooks, among them Med-Math: Dosage Calculation, Preparation and Administration. During this time, she began her service of twenty-one years as an Adjunct Professor of pharmacophysiology and medical ethics at the College of Mount Saint Vincent. Her sixteen years as a volunteer began when the School of Nursing closed in 1999.

Sister Grace used her interests and skills for the elderly and adults with developmental disabilities. She volunteered as a certified ombudsman for the New York State Office of the Aging and became a Board Member of Lifespire, Inc., the Bronx Organization for the Learning Disabled (BOLD), and a member of the Scientific and Ethics Review Board of Saint Vincent’s Catholic Medical Centers of New York. In 2003, she was honored by Saint Vincent’s Medical Center with the Saint Elizabeth Ann Seton Award. In her later volunteer years, Sister Grace offered service at Saint Joseph’s Medical Center, Sisters of Charity Multi-Service Center, both in Yonkers, and the Hyatt Classic Residence (now the Five Star Premier Residences of Yonkers.) In 2014, Sister Grace chose to move to the Assisted Living Program of Jewish Home Lifecare (now The New Jewish Home) in the Bronx, as a coordinator for the Sisters of Charity in residence. She died April 27, 2020, at the Saint Vincent de Paul Rehabilitation Center in the Bronx.

Sister Grace was an excellent teacher and nurse, known for her kindness, compassion, and marvelous sense of humor. She was able to convey her own love of teaching and nursing to her many students over the years. Sister Grace ministered as a Sister of Charity for sixty-eight years and her love for life and ministry was apparent in all she did. We rejoice with her as she enters the presence of our loving God, greeted with the words, “Welcome home, my good and faithful servant.” Rest in peace, Sister Grace.