Sister Grace touched and changed the lives of thousands by her presence, support and work. 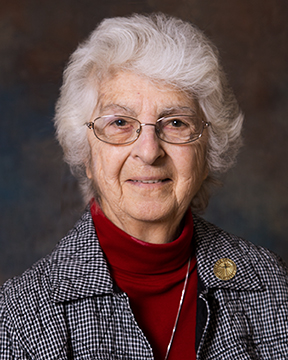 Sister Grace earned a BA in English from the College of Mount Saint Vincent and an MA in English from Fordham University, both in the Bronx. She later received an Ed. D from Teachers College Columbia University in Community and School Relations. She received New York State certification in Administration and Supervision.

Sister Grace’s love of the poor focused her education choices and ministry direction of the next forty-three years toward the promotion of community relations, staff development and strategic planning in the not-for-profit and for-profit sectors, implementing Management by Objectives in schools, hospitals, community centers, and religious congregations, and the development of leadership skills for living in a multi-cultural world with youth and young adults. In 1981, she founded New Dimensions in Leadership, Inc., an organization she directed for over twenty-five years, providing training in racial and ethnic understanding and conflict resolution.

Sister Grace continued her love of teaching on the college level, conducting courses at the College of Mount Saint Vincent, Fordham University School of Social Work and City College Graduate Education Department and in-service courses for the United Federation of Teachers. She published a training manual, I’m a Leader, You’re a Leader, which she used in the workshops she conducted. In 1991, she was recognized for thirty years of fostering racial understanding and interaction among inner-city youth with the first John V. Lindsay Prize for Race and Ethnic Relations. On that occasion she noted, “The problems are absolutely solvable. If people understood each other’s cultures, they would be able to work through their biases.”

Sister Grace touched and changed the lives of thousands by her presence, support and work. Life Experience and Faith Sharing Associates (LEFSA), a sponsored ministry of the Sisters of Charity, for whom she offered teambuilding and life skills workshops, was particularly close to her heart. In 2013, she retired from active ministry and in 2018 moved to Saint Patrick’s Home, the Bronx, where she remained until her death on June 17, 2020.

Sister Grace, we rejoice with you now as you are welcomed into the love and kindness of God by your family, friends, those whom you served and Sisters of Charity who have gone before you. Rest in peace.

Prayer Service, Memorial Mass, and burial of cremains at Mount Saint Vincent at a later date.