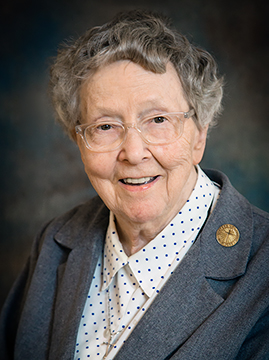 As an example of selfless commitment, she has no equal, though her humility would prohibit her from acknowledging what is obvious to all those who have benefited from her gentle and positive approach to life and living.”

Sister Georgette Dircks (Sister Marie Campion) was born April 27, 1925, in New York City, one of four children, one daughter and three sons, of Curt and Georgette Middleton Dircks. Georgette attended Saint Barnabas Elementary and High Schools, graduated from the College of Mount Saint Vincent with a BA in English and taught for one year before entering the Sisters of Charity of New York on September 7, 1947. Sister Campion received an MA in English from Fordham University and an MA in Religious Studies from Manhattan College. She later earned NYS permanent certification in teaching high school English.

Sister Georgette’s fifty-nine years of ministry experience was entirely in the field of secondary education. Her forty-seven years as a classroom teacher were given to Cathedral High School, Manhattan; Saint Gabriel, New Rochelle; and Holy Cross Academy, Manhattan, with the last thirty years at Saint Barnabas, in the Bronx. During these years, she taught English and Religion in the four high schools and, in Saint Barnabas, also served as Chairperson of the Religion Department for eighteen years.

In 1997, when Sister Georgette stepped out of classroom teaching, she dedicated the next twelve years to volunteer services — all twelve to Saint Barnabas High School in the Development Department. Concurrently, she also volunteered for eight years at Casa de Esperanza, the Sisters of Charity’s multiservice center for immigrants in Yonkers, N.Y.

In 2009, Sister Georgette retired at Mount Saint Vincent Convent for five years. In 2014, she moved to form a retirement community with her sisters at The Jewish Home (now The New Jewish Home) in the Bronx, first in the Assisted Living Program and then at Kittay Senior Apartment where she died on August 13, 2019.

When Sister Georgette was inducted into the Saint Barnabas High School Hall of Fame in 2017, it was noted, “After retiring from the classroom, Sister continued her service to SBHS through her work in the Development Office … As an example of selfless commitment, she has no equal, though her humility would prohibit her from acknowledging what is obvious to all those who have benefited from her gentle and positive approach to life and living.”

Sister Georgette loved teaching and, through her kind and compassionate manner, her students learned much about faith and life from her. She shared loyal friendships and deep ties to family and her sisters in community. She served her God with joy in her seventy-two years of commitment as a Sister of Charity of New York. Sister Georgette, we know you rest in peace.