“Sister Elizabeth always reflected the joy, enthusiasm and love of her God whom she served faithfully as a Sister of Charity…” 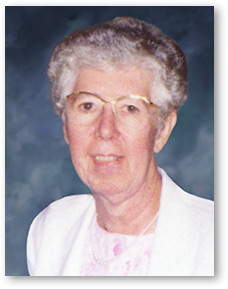 Sister Elizabeth McLoughlin (Sister Marie Matthew) was born on June 14, 1923 in New York City, one of two daughters born to Matthew and Anna McGrath McLoughlin. Elizabeth attended Ascension School and Cathedral High School. She then worked for two years before entering the Sisters of Charity on September 8, 1943. Sister Matthew received her BA in English from the College of Mount Saint Vincent and her MA in Reading and Guidance from Manhattan College.She later earned NYS Permanent Certification in Language Arts, Guidance and as a Reading Specialist.

Sister Matthew was a quintessential elementary educator. Her early mission assignments included Visitation School in the Bronx, and Holy Name, Sacred Heart and Saint John the Evangelist Schools in Manhattan. Sister Matthew was then sent to Immaculate Conception School on Staten Island where she taught for six years. In 1965 she was missioned to Saint Denis School in Yonkers and then Saint Barnabas School in the Bronx. Sister Elizabeth went to Saint Ignatius Loyola School in Manhattan in 1973 where she remained as teacher, bursar and Assistant Administrator for the next twenty-two years. Upon her retirement from education, Sister Elizabeth volunteered as a Patient Representative in Saint Vincent’s Hospital and Medical Center and Mary Manning Walsh Home, both in Manhattan. In both places she provided compassion, an open heart and a listening ear for each patient’s needs and stories.

Upon her retirement to Saint Patrick’s Villa, and later the Convent of Mary the Queen, Sister Elizabeth shared her kindness, warm smile, and many abilities with her sisters and others whom she met. In 2015 she moved to Saint Patrick’s Nursing Home in the Bronx with several other Sisters of Charity.

Sister Elizabeth always reflected the joy, enthusiasm and love of her God whom she served faithfully as a Sister of Charity for so many years. Rest in peace, Sister Elizabeth.