Sister Elizabeth’s heart held a few special loves: the people of the Bahamas and Guatemala, returning for visits and advocating for assistance when natural disasters destroyed their land and lives… 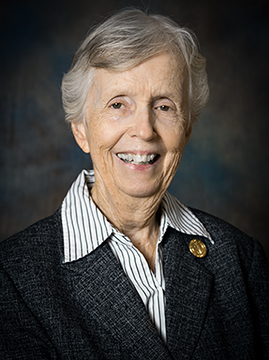 Sister Elizabeth Judge (Sister Marietta Elizabeth), baptized Mary Katherine, was born September 23, 1934, in Staten Island, New York. She was one of three children, a daughter and two sons, born to William and Elizabeth Tuohy Judge. Mary Katherine, or Maureen as family called her, attended Saint Christopher Elementary and Saint Peter High School, both in Staten Island, and entered the Sisters of Charity of New York on September 8, 1952.

Sister Elizabeth received a BA in Spanish from the College of Mount Saint Vincent and an MA in Spanish from Hunter College. She later earned New York State Permanent Certification in teaching Spanish.

Sister Elizabeth’s forty-eight years of active ministry were devoted to education, pastoral ministry and advocacy for persons living in poverty. Her twenty-nine years in education began in elementary education at Saint Charles Borromeo, Brooklyn; Saint Gabriel, East Elmhurst and Saint John the Evangelist, Center Moriches. Her high school experience included Xavier College and Saint Augustine College in the Bahamas, where she taught Spanish, Latin, health science and religion. She also taught Spanish at Saint Gabriel High School, New Rochelle, and All Saints Branch of Cathedral High School before going on mission to Guatemala in 1984. Here she trained and worked alongside catechists in Novillero and Chupol until returning to the United States in 1990. For two years, she cared for her parents in Florida and then continued for three more years to work at Saint Petersburg Free Clinic in St. Petersburg.

When Sister Elizabeth returned to New York, she continued advocacy work at the Little Sisters of the Assumption Family Health Center in Manhattan for seven years. She taught Spanish for a semester at Iona College before starting a four-month sabbatical at Sangre de Cristo Center in New Mexico. In 2004, Sister Elizabeth began ten years of volunteer ministry, which included advocacy work at H.O.P.E. Community Services, New Rochelle, and assistance with the Haitian Apostolate of the Diocese of Brooklyn directed by Bishop Guy Sansaricq, with whom she had worked in the Bahamas.

Sister Elizabeth retired for a brief time at Mount Saint Vincent Convent before moving to Cabrini of Westchester, where she died on April 3, 2021, in the sixty-ninth year of commitment as a Sister of Charity of New York.

Sister Elizabeth’s heart held a few special loves: the people of the Bahamas and Guatemala, returning for visits and advocating for assistance when natural disasters destroyed their land and lives; discovering a new park, waterfall, or garden to explore; and the beauty of Vermont.

We rejoice with you now, Sister Elizabeth, that two long-delayed desires are fulfilled — to sing in a choir — and be reunited with family and friends. Be at peace.

Wake
Prayer and Sharing of Memories on Friday, April 9; 8:30am
Streaming begins at 8:30 am: https://venue.streamspot.com/d286a8ab

Diocese of the Rockville Centre

Diocese of the Bahamas