To join the video stream of Sister Elizabeth Carmela’s Memory Sharing and Mass of Christian Burial on Friday, October 11, at 10:30 a.m., please click on the link: https://venue.streamspot.com/217aa3db

Her friends and Sisters with whom she entered agree that she lived a joyful life and always looked for the best in others. 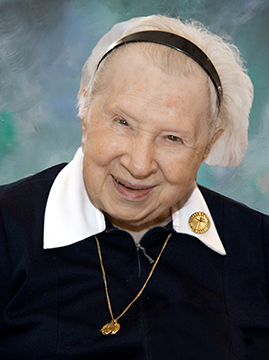 Sister Elizabeth Carmela Engelhardt (Margaret) was born February 27, 1921, in New York City, one of six children—two girls and four boys—of John and Elizabeth Krapp Engelhardt. Margaret attended Saint Joseph School and Julia Richmond High School, both in Manhattan. She worked as a typist and a switchboard operator before entering the Sisters of Charity of New York on September 8, 1952.

Sister Elizabeth Carmela was first missioned to Grace Institute, Manhattan, and Saint Patrick Villa. She then taught grades 1 and 2 at Saint Gabriel School, New Rochelle, Saint Mary School, Wappingers Falls, and Saints Peter and Paul School in the Bronx. She enjoyed preparing children for the reception of First Communion.

Growing up with five brothers and sisters prepared her well for her time as a group mother at Saint Agatha, Nanuet. From December 1961, until October 1992, she worked in a clerical capacity at the New York Foundling, Manhattan. In 1992, Sister Elizabeth Carmela retired to Saint Patrick Villa, Nanuet, and completed volunteer services at Saint Agatha Home.

In 2010, Sister Elizabeth Carmela moved to the Convent of Mary the Queen, Yonkers, and in 2014 was among the first group of sisters to form a retirement community at Kittay Senior Apartments in the Bronx.

Sister Elizabeth Carmela will be remembered for her kind, generous, and caring ways. An excellent worker, she enjoyed the varied ministries in which she was involved and helped to create a vibrant, prayerful community life wherever she was missioned. Her friends and Sisters with whom she entered agree that she lived a joyful life and always looked for the best in others.

We rejoice with her now as she is welcomed into the loving arms of her God whom she served so long and so well. Be at peace, Sister Elizabeth Carmela.