I believe that I have been a visible representative of the teaching and healing presence of the Lord to children in school, nursing students, patients and staff in hospitals, and nursing homes. 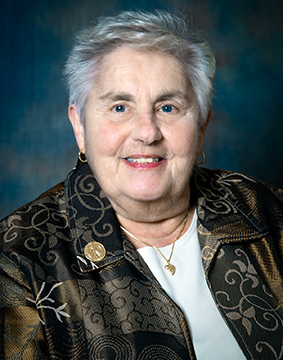 Sister Edith Mercedes Belmonte (Annette Grace) was born September 29, 1934, in New York City, one of two children —Annette, and her brother, Nicholas— of Frank and Edith Walsh Belmonte; she was the niece of Reverend Rocco Belmonte, S.J. Annette attended Our Savior School and Saint Barnabas High School, both in the Bronx, and entered the Sisters of Charity of New York on September 8, 1952.

Sister Edith received a BS degree in Chemistry from the College of Mount Saint Vincent, Bronx, and an MTS in Chemistry and Physics from Catholic University, Washington, D.C. She received permanent NYS Certification in Science and for eighteen years, was a teacher on all levels at Holy Trinity School, Mamaroneck, Holy Cross Academy, Manhattan, and Elizabeth Seton College, Yonkers.

Sister Edith later returned to the College of Mount Saint Vincent to study Nursing and earn a BS; in 1973 she received her R.N. She participated in the National Science Foundation In-Service Institute of Chemistry and Physics at University of Notre Dame, Indiana, Manhattan College, Bronx, and Saint Peter’s College, New Jersey. She served as a Staff Nurse and Nursing Education Instructor at Misericordia Hospital, and subsequently as Clinical Resource Nurse and Patient Education Coordinator at Our Lady of Mercy Medical Center, both in the Bronx. Sister Edith Mercedes ministered as a Community Health Nurse, Home Care Supervisor and Quality Assurance Coordinator at Frances Schervier Nursing Care Center, Bronx, for fourteen years. In 2004, she became Administrator at St. Patrick Villa, Nanuet, where she remained until retirement in September 2009. She enjoyed living at Seton Village, Nanuet, before she moved to Cabrini of Westchester in 2018. She died there on October 17, 2019.

Sister Edith loved to study and imparted that gift to the children, teenagers and young adults whom she taught in schools throughout the Archdiocese. When asked to state the significance of her work to the community and the Church, she responded, “I believe that I have been a visible representative of the teaching and healing presence of the Lord to children in school, nursing students, patients and staff in hospitals, and nursing homes. I have had many opportunities to help formulate, teach and enforce procedures in health care facilities. I have done my best to help students and staff become compassionate, competent and caring people, recognizing the dignity of every person, especially the poor.” She considered it a privilege to take care of one of the Sisters in her “circle,” Sister Kathleen McDonough, during her final days in January 1982.

American missionary Stephen Grellet said, “I shall pass through this world, but once. Any good that I can do or any kindness I can show to any human being, let me do it now, for I shall not pass this way again.” Be at peace, Sister Edith Mercedes, as you are welcomed into the loving arms of God whom you served so well. For the good that you did and the kindnesses that you showed, especially to the poor, thank you.

Funeral services will be video streamed from Mount Saint Vincent Convent on Tuesday, October  22, at 10:30 AM. Streaming will include Memory Sharing at 10:30 AM and Mass at 11:00 AM. We invite you to join us by using the link below.
https://venue.streamspot.com/217aa3db