Sister Doris was kind and compassionate, had a wonderful sense of humor, and loved her work—whether it was in the mountains of Guatemala or the streets of New York. 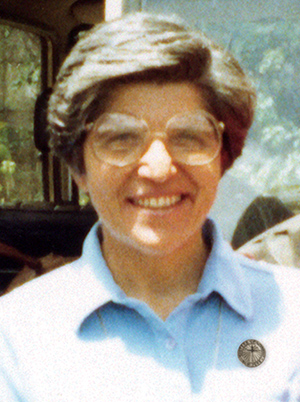 Sister Doris Ann Pagano (Sister Christopher Marie) was born October 16, 1937, in Manhattan, the oldest of one daughter and two sons of Gene and Josephine Inez Scianna Pagano. Doris attended Saint Anthony of Padua School and Cathedral High School, both in Manhattan, and worked for one year before entering the Sisters of Charity of New York on September 8, 1956. Sister Christopher earned a BA in History from the College of Mount Saint Vincent and an MS in Elementary Education from Fordham University. She later received NYS permanent certification and Teacher’s License in Elementary Education.

Sister Doris first studied in Cochabamba, Bolivia, then served in Parish Ministry in El Novillero, Santa Lucia, Guatemala, for eleven years. She returned to New York to study at the Maryknoll Mission Institute, and worked as a ward clerk at Saint Vincent’s Hospital, Manhattan. She then served as Pastoral Associate at Incarnation Parish in Manhattan. In 1985, Sister Doris returned to Guatemala and served as Pastoral Minister in San Marcos. In 1996, she returned to New York and trained to be a hospital chaplain. Sister Doris interned at New York University Medical Center and then worked for thirteen years at Cabrini Center for Nursing and Rehabilitation in Manhattan. She later volunteered in the ArchCare Senior Life Program.

In 2012, Sister Doris retired and moved to the Convent of Mary the Queen. In 2014, she was among the first sisters to form a retirement community at Kittay House in the Bronx. Here Sister Doris continued her spiritual ministry with the Sisters in her community. Despite the loss of her sight, she conducted a scripture-sharing group every Friday afternoon to reflect on the upcoming Sunday gospel. She also participated in planning liturgies and other activities for the Sisters’ spiritual sharing.

Sister Doris was kind and compassionate, had a wonderful sense of humor, and loved her work—whether it was in the mountains of Guatemala or the streets of New York. We rejoice with her now as she is greeted by our loving God, “Welcome home, my good and faithful servant.”

May eternal peace be yours, Sister Doris.