“Throughout all of her years in ministry and community life, Sister Damian was known for her kindness, her patience, and her deep concern for the people she served.” 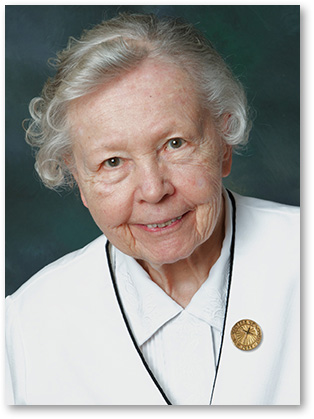 Sister Damian Marie McKeever (Mary Agnes) was born in New York City on July 1, 1928, one of three daughters and two sons of John and Agnes Mooney McKeever. Mary Agnes attended Sacred Heart School and Cathedral High School before entering the Sisters of Charity of New York on September 8, 1946. Sister Damian Marie received a BA in English from the College of Mount Saint Vincent and an MS in Education from Boston College. She later received NYS permanent certification in the areas of elementary education (nursery, and k–6), administration and supervision, and as a reading specialist (k–12).

Sister Damian spent most of her active ministry in elementary education where she filled various roles. Her first teaching assignment was Saint Paul School in Brooklyn, followed by Sacred Heart School in Manhattan. From there Sister was missioned to Saint Patrick School in Bedford Village, and then Saint Peter School in Poughkeepsie. In 1966 Sister Damian became the principal of Our Lady of the Angelus School in Rego Park, where she served for the next thirteen years and was beloved by the children and parents alike. The school was the life of both parish and community during these years; it was a place where children excelled academically and learned the value of serving others. In 1979 Sister Damian moved to Resurrection School in Rye, where she served as principal until 1986; she then became the director of the resource center in Saint Patrick School in Bedford Village. From 1993 through 1998, Sister Damien did home visiting and home care for the elderly and later worked as a volunteer in Saint Paul School in Valley Cottage. In 2006 she officially retired, moving to the Mount Saint Vincent Convent for a year and then to Saint Patrick Villa in Nanuet. Sister Damien moved to the Convent of Mary the Queen in 2011.

Throughout all of her years in ministry and community life, Sister Damian was known for her kindness, her patience, and her deep concern for the people she served. She enjoyed all of the Sisters with whom she lived and was appreciated for her compassion and sense of humor. She loved her family, the Sisters of Charity, and the ministry of education. She is now reunited with her family and the Sisters of Charity who have gone before her. We rejoice with her as she is greeted in the arms of our loving God. Rest in eternal peace, Sister Damian.