Students will remember her ability to make learning fun because she found teaching fun, and friends will remember the joy she brought to every gathering. 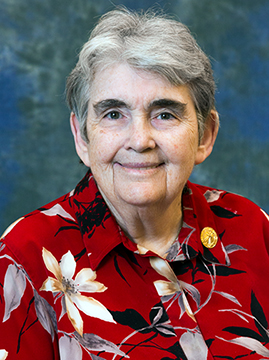 Sister Constance Brennan (Sister Mary Josita) was born July 20, 1936, in Brooklyn, New York, the only child of Joseph and Anne Patterson Brennan. Constance attended Saint Lawrence Academy, Manhattan, for both elementary and high school and, for two years, Rosemont College, Pennsylvania, before entering the Sisters of Charity of New York on September 8, 1956.

Sister Mary Josita earned a BA in English from the College of Mount Saint Vincent, the Bronx, and an MS in Library Science from Columbia University. In 1994, she received an MA in Religious Studies from Saint Joseph Seminary, Yonkers.

Sister Constance’s ministry spanned all levels of education for forty-eight years. Her thirty-three years on the elementary level as teacher and librarian were at Our Lady of Angels, Bronx, Saint Joseph Academy, Manhattan, Saint Joseph, Yonkers, and Visitation, Bronx. Her high school experience spanned twelve years as librarian, teacher, and director of audio/visual media at the Academy of Mount Saint Vincent, Tuxedo Park, and Saint Gabriel, New Rochelle. She assisted College of Mount Saint Vincent students for three years through her library science and media skills.

In 2007, Congregation leadership appointed Sister Constance as Archivist, a position she held for eight years and dearly loved. When Saint Joseph Convent in Yonkers, where she resided, closed in 2015, she joined the retirement community of sisters at Kittay Senior Apartments of The New Jewish Home in the Bronx. It is here she died on September 26, 2020, in the sixty-fifth year of commitment as a Sister of Charity.

No summary of Sister Constance’s years of service would be complete without including her thirty-five years of commitment and devotion to the religious education of children who attended public school. She did not receive a formal assignment to this ministry; her call came from a deep faith and genuine desire for children to know God’s love.

Beginning in 1979, in addition to her commitments as a classroom teacher, she devoted her weekends as a Catechist and then as Director of Religious Education at Saint Joseph Church, Yonkers. She later served as Director of Religious Education at Visitation Church, the Bronx. In 2011, she was honored by the Catechetical Office of the Archdiocese of New York for her years of commitment to this ministry.

Sister Constance loved to cook, act in drama presentations and write poetry. She was kind-hearted and generous, always thinking of others first. Students will remember her ability to make learning fun because she found teaching fun, and friends will remember the joy she brought to every gathering. Her warm, friendly personality cheered the sisters, staff and residents at Kittay. Sister Constance’s love of the Congregation was palpable, and her embodiment of its virtues of humility, simplicity and charity were evident to all.

We rejoice with her now as she is welcomed into God’s unending love and mercy. Be at peace, Sister Constance.

A Mass of Christian Burial for Sister Constance Brennan, SC, was celebrated on October 2. Sister Frances Keegan delivered a heartfelt eulogy for her dear friend. We invite you to watch this moving tribute.