As a good listener, compassionate with those caught in life’s struggles, she became a role model for the hundreds of students fortunate to know her. 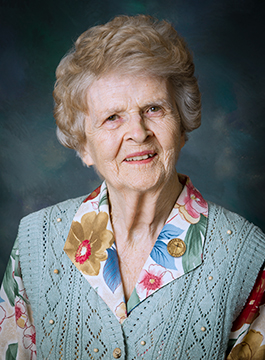 Sister Clare Regan (Sister Grace Matthew) was born August 24, 1926, in Jersey City, New Jersey, one of four daughters and one son of Matthew and Grace Barklow Regan. Clare attended Sacred Heart Elementary School, Bronx, Cathedral High School, Manhattan, and worked for a few years before entering the Sisters of Charity of New York on February 1, 1947. Sister Clare earned a BS in Education from Fordham University, an MTS in Mathematics from Catholic University of America in Washington, DC, an MA in Religious Studies and an MA in Counseling Psychology, both from Manhattan College, the Bronx. She also earned New York State permanent certification in Guidance.

Sister Clare’s fifty years of ministry were in the field of education on the elementary, high school, and college levels. In her first ten years, she taught elementary education at Saint Raymond and Saint Gabriel in the Bronx. In the next thirteen years, she taught high school Math and Religion at York Catholic, York, Pennsylvania, Saint Joseph by-the-Sea, Staten Island, and Cathedral in Manhattan. For twenty-five years, Sister Clare was a Counselor and Director of Guidance at Saint Catharine Academy, the Bronx. She participated in a one-year career options program at Calvary Hospital in the Bronx, before returning to high school counseling in the Guidance Department of Mount Saint Michael Academy, the Bronx. She was an Instructor for Math and Assistant Dean of Students for two years at the College of Mount Saint Vincent, the Bronx.

After retirement in 1999, Sister Clare found several areas in which to offer her gifts and talents in volunteer services. As her health needs increased, Sister Clare moved to the Convent of Mary the Queen in 2011 and, in 2015, was among the first Sisters of Charity of New York to form community at Schervier Nursing Care Center in the Bronx. It was here she died on Ascension Thursday, May 21, 2020.

Sister Clare was devoted to her three sisters and one brother and their children, participating in the celebrations and challenges that marked their lives. All who knew and loved Sister Clare remember her as quiet, adventurous, and able to find humor in life’s situations. She was grateful for friendships maintained over the years and enjoyed being hostess when visitors came by. As a good listener, compassionate with those caught in life’s struggles, she became a role model for the hundreds of students fortunate to know her.

We rejoice with her now as she enters the peace and joy of God’s kingdom and is reunited with family, friends, and all Sisters of Charity who have gone before her. Rest in peace, Sister Clare.