In her busy life, there was always time for family and friends, former students, colleagues, and, in these later years, nursing staff, aides, and other Cabrini residents. 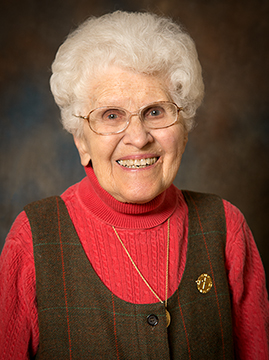 Sister Catherine Smith (Sister Miriam Magdalen) was born January 3, 1919, in Manhattan, one of four daughters of James and Catherine Reilly Smith. Catherine attended Our Lady of Good Counsel School and Cathedral High School, both in Manhattan, and worked as a telephone operator at Bell Telephone before entering the Sisters of Charity of New York on September 8, 1937.

Sister Miriam Magdalen earned a BA in English from the College of Mount Saint Vincent, Bronx, and an MA in Home Economics from New York University. She received New York State Permanent Certification for Grades N–6.

Sister Catherine served in the ministry of education for thirty-six years on various levels. She taught grade one at Saint Paul, Home Economics at Bishop McDonnell High School, both in Brooklyn, and served as Principal of Blessed Sacrament High School, Manhattan. She became Director of Grace Institute, Manhattan, which provided further education for young women wishing to work outside the home; she continued to work with young adults at Elizabeth Seton College, Yonkers. Sister Catherine then devoted thirteen years to the Congregation’s ministry for its retired sisters as Director of Retirement and Assistant Administrator at Convent of Mary the Queen, Yonkers.

After fifty years of active full-time ministry, Sister Catherine volunteered for twenty-one years at Saint Joseph Medical Center, Yonkers, overseeing the Gift Shop and visiting patients. In 2016, she joined the retirement community of Sisters of Charity at Cabrini of Westchester, Dobbs Ferry, and lived there until her death on October 24, 2020, at 101 years of age.

Sister Catherine was a valued member of several committees where her gifts and experience served to further the Congregation’s mission. In her busy life, there was always time for family and friends, former students, colleagues, and, in these later years, nursing staff, aides, and other Cabrini residents. Among the treasures in her room in Cabrini was a picture of FDNY Chaplain, Father Mychal Judge, who died in the North Tower of the World Trade Center on September 11, 2001. Sister Catherine had taught him at Saint Paul School, Brooklyn.

All who knew Sister Catherine spoke of her spirit of joy, limitless generosity, and love and concern for others—qualities alive and well during her eighty-three years of commitment as a Sister of Charity.

We rejoice with Sister Catherine as she is welcomed home by our loving God, her family, friends and the Sisters of Charity who have gone before her. Rest in peace, Sister Catherine.