Sister Bernadette’s gifts were her solid common sense, her peaceful presence, and unwavering commitment to those she served so well. 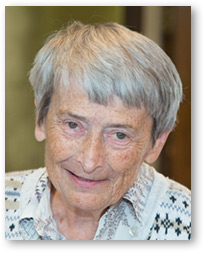 Sister Bernadette Marie Del Frate (Sister Maureen Joseph) was born September 11, 1931 in Jackson Heights, Queens. She was one of two daughters born to Victor and Marguerite Ryan Del Frate. Bernadette attended Sacred Heart School, Bronx, and Cathedral High School before entering the Sisters of Charity of New York on September 8, 1949. She earned a BA in Latin and Education from the College of Mount Saint Vincent and an MA in Education Administration from Marquette University. She later earned NYS Permanent Certification for grades N–6 and Elementary School Administration.

Sister Bernadette’s first ministry was elementary education. She taught at Our Lady of Angels, Bronx, and Resurrection, Rye. She was principal of Saint Gabriel, East Elmhurst, and Sacred Heart, Hartsdale. Sister Bernadette spent one year at the Elizabeth Seton House of Prayer, Scarsdale, where she was involved in prayer ministry there. She became the Director of Education for the Sisters of Charity in 1985 and in 1987 was elected a Regional Coordinator for two terms, serving until 1995. After a year sabbatical at the Washington Theological Union, Sister Bernadette became Director of Grace Institute Outreach Program, Bronx, for two years, and then taught in the program for two additional years. She was Assistant to the Director of the Sisters of Charity Multi-Service Center, Yonkers, for three years. Sister Bernadette retired in 2003 but continued in many volunteer activities in Sacred Heart Parish, Hartsdale, throughout the next decade. In her few moments of spare time, she loved to get her hands into the earth of the convent garden.

When Sister Bernadette moved to the Convent of Mary the Queen, she continued to be a community-minded and prayerful presence. Throughout her years of ministry, she was kind, compassionate and able to bring her love of learning to everyone she encountered. In 2015 she moved from the Convent of Mary the Queen to Schervier Nursing Care Center in Riverdale with a small group of sisters. Though reticent in social situations, Sister Bernadette’s gifts were her solid common sense, her peaceful presence, and unwavering commitment to those she served so well.

Our loving God welcomes you home, Sister Bernadette, with a warm and loving embrace for you have been God’s good and faithful servant for many years as a Sister of Charity. May you rest in everlasting peace.