“She is always there when we need her, and her door is always open for the faculty and children.” 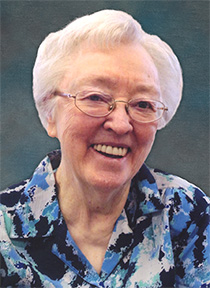 Sister Audrey Boylan (Sister Thomas Miriam) was born on November 24, 1929 in New York City, the only child of John and Florence Aubrey Boylan. Audrey attended Saint Columba School, Cathedral High School, and Hunter College, all located in Manhattan. On February 2, 1950 she entered the Sisters of Charity of New York and received the religious name Sister Thomas Miriam. Sister Thomas received a BA in History from the College of Mount Saint Vincent, an MA in Education from Seton Hall University, and an MA in Administration from Richmond College, Staten Island.

Sister Audrey’s ministry of education spanned many levels, from elementary through university. After teaching at Saint Athanasius, Bronx, and Epiphany, Manhattan, she was missioned to Our Lady Star of the Sea, Staten Island, in 1965. Here she taught for six years and was then appointed principal where she served until 1984. In September 1981, Sister Audrey was unanimously named Today’s Catholic Teacher Principal of the Month by her students and staff and at the 1982 annual National Catholic Education Association Convention in Chicago, Sister Audrey received the Principal of the Year Award. A teacher at Our Lady Star of the Sea stated that Sister Audrey had the right combination of virtues. “I find her exceptionally warm and compassionate, and yet a strong and very demanding principal. She is always there when we need her, and her door is always open for the faculty and children.”

In 1984, Sister Audrey was appointed as principal of Saint Ignatius Loyola School in Manhattan. She remained here until 1990 when she became an Educational Mentor at Fordham Graduate School of Education, Bronx. In 1994, Sister Audrey became the Director of Student Affairs, and then Director of Operations at Grace Institute. In 1999 she returned to Fordham University as an Educational Mentor until 2006. Sister Audrey volunteered in the Archives of Saint Vincent Hospital, Manhattan, until her retirement in 2009.

Sister Audrey was a kind, compassionate and concerned educator and administrator. She was a firm, but fair, disciplinarian and an example of understanding to all those with whom she lived and worked. Sister Audrey, rejoice now as you are welcomed into eternity by your loving God whom you served so well as a Sister of Charity.