“Sister Anne Rita’s love of learning was apparent to all of her students. She was able to convey to them her high expectations, thirst for knowledge, and love of literature.” 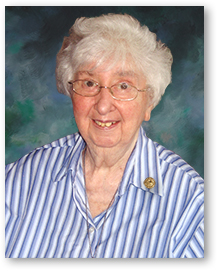 Sister Anne Rita Cullen (Sister Miriam Gerald) was born November 10, 1919 in Manhattan, one of four daughters and two sons of James and Margaret Buckley Cullen. Anne Rita attended Saint Luke’s School in the Bronx and Cathedral High School in Manhattan before entering the Sisters of Charity of New York on September 8, 1939. She earned a BA in Latin from the College of Mount Saint Vincent, an MA in Classics from Hunter College, and an MLS from Saint John’s University.

Sister Anne Rita was involved in various ministries throughout her religious life. She taught in elementary schools from grades one to eight at Saint John the Baptist, Brooklyn; Saint Peter, Poughkeepsie; Saint Peter, Yonkers; Saint Paul, Manhattan; Saint John the Evangelist, Center Moriches; and Our Lady of Mercy, Port Chester. After serving as the Religious Education Director for four parishes in Westchester, she returned to Saint Raymond School, Bronx, and then became the librarian at Saint Joseph by-the-Sea High School on Staten Island. For the next fifteen years library work would be her primary ministry. Sister Anne Rita was also the librarian at Sacred Hearts School, Southampton, Our Lady of Perpetual Help, Manhattan, and the Berkeley School in Manhattan where she was the Director of the Library. From 1988 until 2004, Sister Anne Rita worked for the NYC Department for the Aging where she was able to assist many of the city’s senior citizens. In 2004 Sister retired to the Convent of Mary the Queen where she lived until 2015 when she moved to Schervier Nursing Care Center with other Sisters of Charity.

Sister Anne Rita’s love of learning was apparent to all of her students. She was able to convey to them her high expectations, thirst for knowledge, and love of literature. She enjoyed her life in community throughout her seventy-seven years and found sharing prayer and conversation an important part of community. We rejoice with her now as she is welcomed into the loving arms of her God and greeted by her family, friends and all the Sisters of Charity who have gone before her. Rest in peace, Sister Anne Rita.