Sister Anne brought her enthusiastic spirit and personal warmth to the hundreds of students she greeted each day and to the families whose joys and sorrows she willingly embraced. 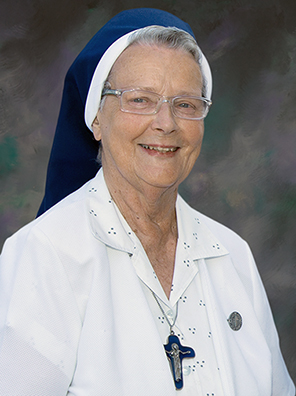 Sister Anne, formerly Sister Joseph Marian, was born April 25, 1936, in the Bronx. She was one of eight children, three daughters and five sons of James and Elizabeth Purcell O’Connell. Anne attended grades 1–6 at Our Lady of Angels School in the Bronx and grades 7–12 at Saint Walburga Academy in Manhattan. Her sister, Mary, was a religious of the Society of the Holy Child Jesus who staffed the Academy.

Sister Anne dedicated 54 years of active ministry to education on the elementary and high school levels. Her first missions in elementary grades were at Saint Joseph in Manhattan and Elizabeth Seton Academy in the Bronx.

With her degree in science, Sister Anne taught biology and chemistry, along with religion, at the Academy of the Resurrection in Rye, the Academy of Mount Saint Vincent at Tuxedo Park, and Cardinal Spellman High School in the Bronx. She returned to elementary education at Nativity of Our Blessed Lady in the Bronx, participating in the departmental instruction for the upper grades. At the end of 10 years, she moved to Saint Joseph in Florida, New York, to teach the upper grades.

For the last 17 years of ministry, Sister Anne brought the experiences of her previous 37 years of education to the position of School Utilization Coordinator for Instructional Television in the Archdiocese of New York.

In 2012, Sister Anne retired and devoted her volunteer service to the Hispanic community of Saint Peter Church in Yonkers, where she lived for 22 years. Among the parish activities, she sang in the choir, helped in the soup kitchen, hosted a weekly prayer group, and made home visits.

In 2016, Sister Anne joined the retirement community at Mount Saint Vincent Convent and, in 2020, moved to the Kittay Senior Apartments in the Bronx. Sister Anne died February 13, 2022, in the 68th year of commitment as a Sister of Charity of New York.

Sister Anne brought her enthusiastic spirit and personal warmth to the hundreds of students she greeted each day and to the families whose joys and sorrows she willingly embraced. It surprised no one to see her running a three-legged race on school field day or dancing the polka at a church party. A trip to Our Lady’s shrine in Medjugorje in 1995 was a deep-felt blessing in her life.

Sister Anne, you have proclaimed the Gospel well in your life of service to the people of the Church of New York. A loving God waits to welcome you into the fullness of love reserved for all eternity. Go forth in peace. Thanks be to God!