She held high standards for her students, helping them achieve excellence in their work. Students will remember her for her kindness, generosity and dedication. 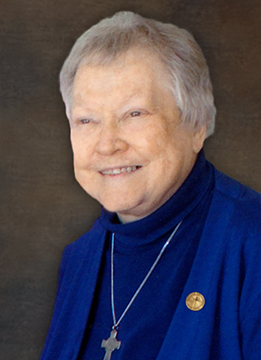 The Mass of Christian Burial for Sr. Anne Miriam Connellan was streamed from St. Margaret of Cortona Church on Saturday, September 26. The recording will be available to view until October 26 at this link: https://venue.streamspot.com/217aa3db

Sister Anne Miriam Connellan (Anne Marie) was born September 13, 1925, in San Francisco, California. She was one of eight children, two boys and six girls, of Thomas J. and Anne Jones Connellan. Anne Marie began her education at Saint Margaret of Cortona School in the Bronx. In third grade she transferred to the Academy of Mount Saint Vincent, continuing through to her high school graduation. She then attended the College of Mount Saint Vincent, Bronx, graduating in 1946 with a BA in English, and entered the Sisters of Charity of New York on September 8, 1946.

Sister Anne Miriam earned an MA in English from the Catholic University of America in Washington, D.C., and later received New York State Permanent Certification in English and Art.

Sister Anne spent forty-six years in the ministry of education, six years on the elementary level and forty on the high school level. Her elementary experience was at Holy Name and Blessed Sacrament, both in Manhattan, and Academy of Mount Saint Vincent, Tuxedo Park, New York. Sister Anne’s high school teaching began at Cathedral in Manhattan where she would devote thirty-three non-consecutive years as a teacher of English mainly and, in later years, of Art Appreciation. She was missioned to Nassau, Bahamas, as Headmistress of Xavier College, taught at Saint Barnabas, Bronx, and Saint Joseph by-the-Sea, Staten Island.

After retiring from active ministry, Sister Anne worked as a volunteer in Saint Malachy Parish, Manhattan, and assisted others while living in the Bronx. She excelled in sketching, painting and needlework, and enjoyed sharing her many gifts.

In 2000, Sister Anne retired at Mount Saint Vincent Convent until 2014, when she and a group of sisters formed a retirement community in the assisted living facility of the Jewish Home and Lifecare in the Bronx. She later moved to Saint Joseph’s Nursing Home, now called Yonkers Gardens, where she died on September 16, 2020, in her seventy-fifth year of commitment as a Sister of Charity of New York.

Working with students of all ages, Sister Anne conveyed a love of reading and learning to those she taught. She held high standards for her students, helping them achieve excellence in their work. Students will remember her for her kindness, generosity and dedication. Sister Anne remained close to her brothers and sisters and extended family and maintained interest in the Congregation’s life and concern for other sisters.

We rejoice with her now as she is welcomed into her eternal home by our loving God, whom she served so well. Be at peace, Sister Anne Miriam.