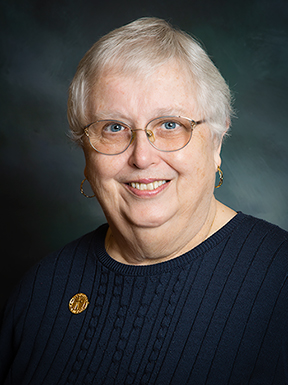 Sister Ann Marie Lafferty (Sister Elizabeth Ann) was born December 17, 1940, in Brooklyn, New York, one of two children— a son and a daughter — of Edward and Marie Sullivan Lafferty. Ann Marie attended both Our Lady of Angels Elementary School in Brooklyn, and Saint Virgil Elementary School, Morris Plains, New Jersey. She graduated from Bayley-Ellard High School, Madison, New Jersey, and went on to attend College of Mount Saint Vincent, graduating June 1962, with a BA in Social Studies. Ann Marie entered the Sisters of Charity of New York that year on September 8. In 1966, she received an MA in Religious Studies from Fordham University and, later, an MBA in Finance from Manhattan College in 1992.

Sister Ann Marie spent the first twenty-three and a half years of her ministry in elementary education. She taught at Visitation School, Bronx, for a year and a half, and the remaining twenty-two years were spent at Saint Athanasius School, Bronx; five as a classroom teacher and seventeen as Principal. In 1989, she began studies for her degree in finance, attending classes part-time and working in the Finance Office of the Sisters of Charity part-time. When Sister Ann Marie obtained her MBA in 1992, Sister Elizabeth Vermaelen, then President of the Congregation, named her Treasurer of the Sisters of Charity, a position she held until 2003. Sister Ann Marie then offered her skills and service to College of Mount Saint Vincent, first as Assistant Director in the Finance Aid Office and then, from 2016 to the present, as Assistant Comptroller, at the College. At the time of her death on July 19, 2019, Sister Ann Marie was living in Ely Hall on the campus of the college.

It is interesting to note that Ann Marie received the religious name, Sister Elizabeth Ann, because Elizabeth Ann Seton was beatified at the time Ann Marie was receiving the habit and religious name in 1963. Sister Ann Marie could claim the gift of hands; with a “green thumb” she could make any plant live and thrive, she loved to cook and put a delicious meal on the table, turning out baby outfits and other knitted items was a way to relax.

Be at peace, Sister Ann Marie, as you enter into eternal life and hear the words of our loving and gracious God: Welcome Home!