When she moved to Assisted Living at age 97, Sister Angela found another ministry — to spread joy among the residents. 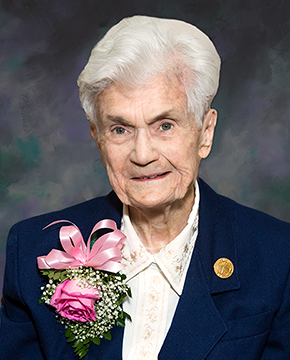 Sister Angela Marie on the occasion of her 100th Birthday in February 2017.

Sister Angela Marie Rooney (Catherine) was born February 22, 1917, in Manhattan. She was one of three children, two daughters and one son, of Hugh and Bridget Hearty Rooney. Catherine attended Our Lady of Mercy Elementary School and Mount Saint Ursula Academy, both in the Bronx. After receiving her regents’ diploma in 1934, she earned a business diploma from Grace Institute, Manhattan, completed one year at Hunter College and worked for a few years before entering the Sisters of Charity of New York on February 2, 1939. Sister Angela completed a BS in Business Education at the College of Mount Saint Vincent, the Bronx.

Sister Angela had two principal areas of ministry in her sixty-six years of active service — education and office management. Her forty years of elementary and middle school teaching were spent at Holy Trinity, Ascension, and Saint Joseph in Manhattan, Visitation and Saint Athanasius in the Bronx, Saint Francis of Assisi, Mount Kisco, Saint Gabriel, East Elmhurst, and Saint Denis, Yonkers. 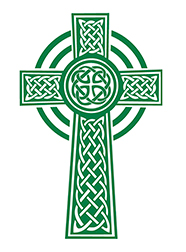 Sister Angela subsequently brought her secretarial skills to the Sisters of Charity Center where she was Staff Secretary for twenty-six years, with another five as a volunteer. When pens and pencils made way for computers at the Sisters of Charity Center, Sister Angela was not intimidated. She adapted her skills to have the new technology assist in her work. She mastered the art of computer-designed cards and delighted in choosing the font to fit the verse she wrote.

In 2010, Sister Angela retired at Mount Saint Vincent Convent and later moved to the Convent of Mary the Queen in Yonkers. In 2014, she was among the first group of sisters who moved to the Assisted Living Program at Jewish Home Lifecare (now called The New Jewish Home) in the Bronx. When she moved there at age 97, Sister Angela found another ministry — to spread joy among the residents. She knew everyone by name and greeted each person with a smile. She would often “run errands” for others no longer able to venture out on their own.

As her health needs increased, she joined the nearby community of retired Sisters of Charity living at the Kittay Senior Apartments. Sister Angela died at Saint Vincent de Paul Skilled Nursing and Rehabilitation Center in the Bronx on May 27, 2020.

Sister Angela loved life and took great delight in all God had given her. We rejoice with her now as she enters God’s loving presence, greeted by the words, “Welcome home, good and faithful servant.” Rest in peace, Sister Angela.