In everything she did or was asked of her, Sister Alice showed an easy smile, laughing eyes, willing hands, and a gracious manner. 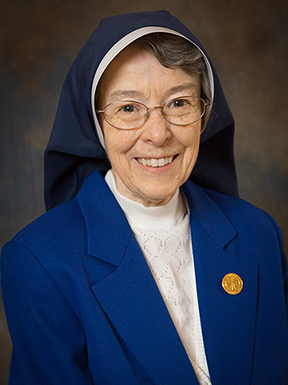 Sister Alice Maureen Darragh (Maureen) was born March 11, 1933, in Kearney, New Jersey. She was one of three children, two daughters and one son, of Patrick and Alice Burns Darragh. Maureen attended Saint Thomas Aquinas Elementary School in Bronx, New York, and Cathedral High School in Manhattan. She worked for two years in the office of Western Electric Company before entering the Sisters of Charity of New York on September 8, 1953.

Sister Alice earned a BA in Spanish from College of Mount Saint Vincent and a MA in Business Education from New York University. New York State awarded her certification in General Commercial education and in School Administration and Supervision.

Sister Alice’s forty-four years of ministry in education spanned elementary and high school in the classroom and administration. Her thirty-one years in elementary education were in the classrooms of Saint Joseph, Yonkers; Saint John the Evangelist, White Plains; Saint Stephen, Manhattan; Nativity of Our Blessed Lady, Bronx, and as Principal at Nativity of Our Blessed Lady and Saint Joseph, Florida, New York. Her years of high school education were at Cardinal Spellman High School, Bronx, where she taught Business Education and chaired the department, and at Cathedral High School, where she supported administrative clerical work and taught computer operations.

Sister Alice’s following years of active ministry were at the Sisters of Charity Center, serving for three years as the administrative assistant to the President of the Congregation and eight years in database services to the Center in general. In 2011, Sister Alice retired to Saint Patrick Villa, Nanuet, and in 2019 she joined the sisters at Saint Patrick Home, Bronx.

Over thirty years ago, when Sister Alice was asked how she was preparing for her retirement, she responded that she hoped “… a positive and joyous manner will mark my autumn years.” We can all attest that she achieved her wish, and certainly demonstrated  the qualities by which she wanted to be remembered — “humorous, prayerful, gentle.” In everything she did or was asked of her, Sister Alice showed an easy smile, laughing eyes, willing hands, and a gracious manner.

Sister Alice, as you enter the mystery of eternal life, our tender God welcomes you to the place prepared for you.