“Throughout her life Sister Agnes was a dedicated teacher, a kind and compassionate person and an excellent listener.” 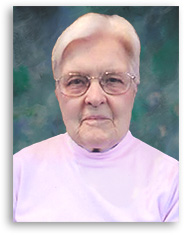 Sister Agnes Regina Hughes (Jean Marie) was born on March 11, 1931 in Rochester, NY, the oldest of five daughters born to Francis and Marie Wolf Hughes. Jean attended Blessed Sacrament School, Bronx, and Cathedral High School before entering the Sisters of Charity of New York on September 8, 1949. Sister Agnes Regina earned a BA in Mathematics from the College of Mount Saint Vincent and an MA in Religion from Providence College, Rhode Island. She later earned NYS Permanent Certification in Elementary Education and Mathematics. Sister also received certification as a Chaplain from the National Association of Catholic Chaplains.

Sister Agnes Regina’s early ministry was in elementary education. She taught for a total of twenty-one years in the following schools: Saint Stephen School, Saint Joseph Academy and Saint Paul School, all in Manhattan; Saint Peter School, Staten Island, and Our Lady of Mercy School, Port Chester. She later became the Religious Education Coordinator at Our Lady of Mercy Parish for seven years. Sister then moved to the Elizabeth Seton House of Prayer in Scarsdale and became involved in the ministries and apostolate there. She was also the Religious Education Coordinator for Immaculate Heart of Mary Parish, also in Scarsdale. In 1985 Sister Agnes began the Clinical Pastoral Care Education Program at Cabrini Hospital. She then ministered as an Associate Chaplain at Lawrence Hospital in Bronxville where she coordinated pastoral care services for Catholic patients, attended monthly meetings of the Bronxville clergy — at which six different denominations were represented — and held occasional meetings with the hospital staff concerning pastoral care issues. After her retirement, Sister Agnes volunteered in the Pastoral Care Department in Saint Joseph’s Medical Center, Yonkers, and Sound Shore Medical Center, New Rochelle. She later volunteered in the ministry of Pastoral Care at Holy Name of Jesus Parish in New Rochelle until 2008. Sister moved to Mount Saint Vincent Convent and then the Convent of Mary the Queen, where she lived until 2015 when she moved with a group of sisters to Frances Schervier Nursing Care Center in the Bronx.

Throughout her life Sister Agnes was a dedicated teacher, a kind and compassionate person and an excellent listener. Her pleasant personality and ever-present smile made her well loved by the children she taught, the patients she visited and the sisters with whom she lived. We rejoice with her now as she is welcomed home by her family, friends and the Sisters who have gone before her and is embraced by the God whom she loved and served so long and so well as a Sister of Charity. Rest in peace, Sister Agnes Regina.