The Children’s Rehabilitation Center (CRC) will be featured on News12 Westchester tomorrow, August 20, 2014, at 5 p.m.

The special will focus on Shaun, a 2-year-old with multiple, complex medical diagnoses who receives services at the Children’s Rehabilitation Center. “Shaun’s Story” will share how the CRC, along with some of the affiliated specialists in the community, have come together to transform the life of this child. 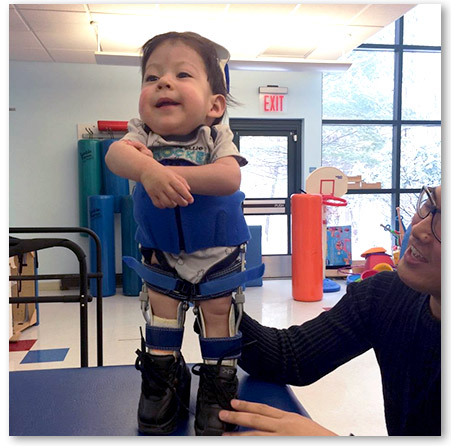 Shaun Lopez is a 1-year-old boy from Port Chester with Spina Bifida, paralysis from the thoracic and severe Kyphosis. As a result, Shaun previously had to lay horizontally, in a sleeping position, and was unable to participate in the world going on around him. But Dr. Maria A. Pici, the Medical Director at the Children’s Rehabilitation Center, changed all of that. “We want to make Shaun as healthy and happy as possible and to do that, we have to stimulate him … we have to help him grow. We knew we had to find a way to build up his strength and give him as much potential for standing as possible,” she said. A custom-made brace, unique to Shaun’s back, chest, hips and feet, was the resolution she came up with.

So, Dr. Pici and the physical therapy staff at the CRC, with the help of JK Orthotics & Prosthetics in Mount Vernon, spent six months designing and engineering a custom brace for baby Shaun to encourage his body to grow and to build his muscles. Once it was finished, Dr. Pici had Shaun and his mother come to the clinic to see how it would work. “He loved it!” Dr. Pici exclaimed. “He’s used to lying down all the time, but with the brace on he could be upright and look around … he was so interested and happy!” she said.

For the long-term, Dr. Pici explained, using a brace to help Shaun stand now will benefit him even into adulthood. “The strength that this builds will help him perform upper extremity activities in the future,” she said, adding that it might also prevent Shaun from developing diseases secondary to his diagnoses, like infections, cardiac issues and lung problems.

Shaun is continuing to work towards his goals with Dr. Pici and healthcare team comprised of orthopedists, neurologists, urologists and physical, occupational and speech therapists. He wears his brace at the Children’s Rehabilitation Center at least three times a week in 15-20 minute intervals, but Dr. Pici is optimistic that he will soon be able to build up his endurance to stand for about 30 minutes. “The more endurance he can build up, the longer he can stand, and the more he’ll grow,” Dr. Pici said. “That’s the point. And we’re going to get there.”

Right now you can check out a preview of News12 Westchester’s segment on YouTube at: www.youtube.com/SESCFoundation. After the segment airs, it will be available in its entirety on that site.

Children’s Rehabilitation Center is a division of the Elizabeth Seton Pediatric Center, a sponsored ministry of the Sisters of Charity.