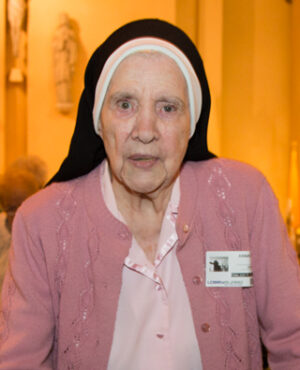 Sister Anna Marian entered the Congregation of the Sisters of Charity of New York on February 1, 1947, her twentieth birthday. Her first mission was at Our Lady of Mt. Carmel on 116 Street, where she served for six years.

With two other sisters, Sister Marian began ministry at Our Lady Star of the Sea on Staten Island in 1958, living very simply in Quonset huts. A new convent and school were built soon thereafter. She was inspired by the sisters with whom she worked, as well as by two wonderful priests in the parish.

It was during her thirteen years in teaching the ministry at St. Joachim in Beacon, New York, that she worked with Sr. Therese Hannaway, who has been her good friend throughout her community life.

Sister Anna was an educator for forty rewarding years. While at St. John and Paul Convent in Larchmont, she began a different ministry as receptionist at the Salesian Missions, which she enjoyed for another fifteen years.

Sister Anna Marian retired to the Mount Saint Vincent Convent in 2003. When asked to begin a newly formed community in 2014 at the New Jewish Home ALP in the Bronx, she graciously said “yes.” Sister Marian is among the group at the ALP currently moving to Kittay Senior Apartments.

In her community today, she describes her ministry as a “life mostly of prayer.” Sr. Anna participates in Masses for deceased Sisters through live streaming. She is grateful for the generous services at the New Jewish Home, and is particularly inspired by Sr. Mary Kay Finneran, Sr. Grace Henke, Minerva (a companion to the sisters at the New Jewish Home), and other aides at the residence. She also enjoys the company of other Sisters of Charity in her community. In summary Sr. Anna said: “God is good!”