Paraphrased from “Angels in the Valley,” in Elizabeth Bayley Seton, by Annabelle M. Melville 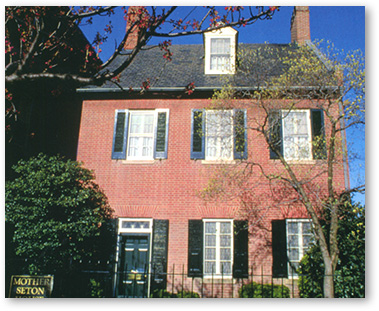 Elizabeth Seton opened her first school in this building on Paca St. in Baltimore.

As we celebrate Catholic Schools Week, it is interesting to go back in time and wonder, “What exactly was Saint Elizabeth Seton’s first school like? How was it organized? What textbooks were used? What about the discipline? How much Religion was taught? Thanks to Annabelle Melville we have some answers to these questions as well as some insights into the foundress of the American Catholic Parochial School System.

An insight into Elizabeth’s school comes from a letter she wrote to her friend Eliza Sadler, “The days passed in quiet and order, and the energetic little head mistress went about with her manner of looking upon twenty people in a room with a look of affection and interest, showing an interest in all, and a concern for their concerns.”

How was the school organized?
Mother Seton was the head, with Sister Kitty Mullen in charge of discipline and four Sister Mistresses of Education. The Sister in charge of discipline preserved good order during both class and recreation periods and was responsible for decorum when the girls went abroad as a group. Mother Seton was informed in weekly reports of any “capital fault.”

What textbooks were used?
The expense account for the school’s first year shows that Catechisms, spellers and grammars were the three chief texts purchased. As the school grew, and it grew by leaps and bounds, the organization developed and the curriculum expanded. The principal subjects were reading, grammar, geography, arithmetic, music, needlework. The languages of French, Spanish and Italian were offered as electives.

What was the schedule of the day?
The routine of the school day varied very little from summer to winter and, because for the most part the students were boarders, their schedule governed their entire day. They rose at 5:45 AM, were allowed a half hour to dress, and were at prayers by 6:15 AM. Breakfast was at 7:30 and the time before eating was divided between Mass and Study. Classes began at 8:00 AM and continued until 11:30 when “beads took place.” From dinner until 3:00 PM a recreation period took place. Classes were then resumed and were interrupted by a brief period of recreation until 7:00 PM when dinner was served. After supper one of the older girls read from a spiritual book which was explained by Mother Seton or one of the other girls. The older girls could then study until retirement.

Were there rewards? First Honors? Demerits? Plan Books? Teacher Observations?
Teachers at St. Joseph were expected to make daily notes on the achievements of their pupils. “Bad points” had to be remedied by two “good points” by the end of each month. Mother Seton visited each class once a month to make suggestions to both teachers and pupils. Medals and certificates were used as rewards and the six girls who excelled were given extra rewards in the form of books.

How much Religion was taught?
We can see that religion was not only taught but periods of prayer were interspersed throughout the day. It is a matter of record that after the girls left the peace and tranquility of St. Joseph’s, they often wrote to Mother Seton expressing gratitude for their formation and stating that the habit of prayer and recollection accompanied them throughout their lives.