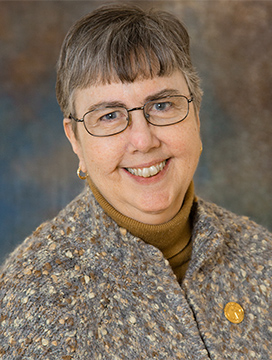 Sister Margaret O’Brien, SC, brings vast leadership experience to her newly elected role as Councilor. She has served as Congregation Treasurer since 2012, was Regional Coordinator on the Council from 2003 to 2011, and most recently served as the Assistant to the President.

During her fifty-nine years as a Sister of Charity, Sr. Margaret has ministered in several capacities. Her first ministry was in education, where she taught at Immaculate Heart of Mary in Scarsdale, and St. Brigid in Manhattan, before serving as a librarian at St. Brigid for eight years. She then served in school administration at St. Joseph in Yonkers, and as Principal at St. Paul in Manhattan, before theological studies brought her to California in the late 1980s.

She elected to attend the Jesuit School of Theology in Berkeley. Upon completion of her studies, Sr. Margaret remained in California to accept a position in the Hayward Public School District. It would offer her an opportunity to serve a diverse student population. She served as teacher and librarian during her eleven years.

Returning to New York at the end of her sabbatical in 1999, Sr. Margaret had full intention of returning to education. However, it was not to be as she was appointed by the Congregation Leadership to serve as Senior Vice President for Mission at St. Vincent’s Hospital and Medical on Staten Island.

She returned to the Bronx in 2003 when she was elected to serve in Sisters of Charity Leadership as Regional Coordinator.

In her spare time, she enjoys cooking, music, reading, and solving puzzles.

Sister Margaret is a graduate of Our Lady of Angels and St. Barnabas High School, both in the Bronx. She holds a BA in English from the College of Mount Saint Vincent, an MS in Library Service from Columbia University, and a CTS from the Jesuit School in Berkeley, Calif. She entered the Sisters of Charity in 1960; her religious name was Sr. Mary Elizabeth.