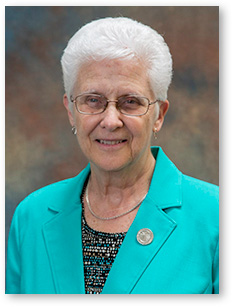 Sister Kathleen Byrnes, SC, was re-elected to a second four-year term as Regional Coordinator during Assembly 2015. Prior to being elected to Leadership in 2011, she served as Director of the Mobile Soup Kitchen ministry at St. John’s Bread and Life in the Diocese of Brooklyn.

Sister Kathleen’s first ministry was at St. Paul School, Manhattan, where she served as teacher, assistant principal and principal (1969–82).  She continued in education, serving as Assistant Director for the archdiocesan Parish School Planning Program for two years, then as Director for three years. After eighteen years in education, Sister Kathleen transitioned to social work and served at the New York Foundling Hospital as case worker, home finder, adoption worker, and foster care worker. After studying Spanish in Bolivia, Sister Kathleen was able to utilize her many skills in Guatemala where she served for seven years.

Beginning in 1998, Sister Kathleen worked for a total of nine years on Staten Island, first as Community Resource Coordinator at the Sisters of Charity Healthcare facility and than as a social worker at St. Vincent’s Catholic Medical Center.

Sister Kathleen holds a BA in History from the College of Mount Saint Vincent, an MS in Elementary Education from Hunter College, and an MSW from Fordham University. She received New York State Certification in School Administration and has studied at the Maryknoll Language School in Bolivia.

Sister Kathleen entered the Congregation in 1964; her religious name was Sr. Maura Thomas. She is a graduate of St. Raymond Academy and St. Raymond Elementary School, both in the Bronx.