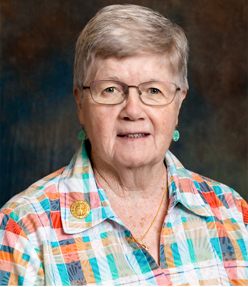 Being a member of the Sisters of Charity Leadership Team is not a new role for  Sister Dorothy Metz, SC. From 2003 to 2011 she was President of the Congregation and during the previous eight years she was a Regional Coordinator.

In her early years of ministry, Sister Dorothy taught at St. Peter, Staten Island, St. Anthony and St. Gabriel, both in the Bronx, St. Peter, Yonkers, and was Principal at St. Francis of Assisi, Mt. Kisco. She spent fifteen years at St. Barnabas High School in the Bronx, serving as teacher, department chair, campus minister, and the first director of development. In her role as development director she was remembered as “a leader who was looking into the future.”

That focus on future trends that would impact religious life continued during her years in congregation Leadership. She served on many congregation committees, such as the Global Implementation Team. She was deeply involved in the early days of the Community Supported Agriculture Farm in Stanfordville, N.Y., and the Barbara Ford Peacebuilding Center in Guatemala.

In addition to her congregational commitments, she was elected Chairperson of the Executive Committee of the Archdiocesan Committee of Women Religious (ACWR) in 1998. Today Sister Dorothy is Chair of the Board of the Elizabeth Seton Children’s Foundation.

When once asked to identify the most pressing needs of the Church she responded: “The Church needs to reach out to all people in order to form relationships with them and to empower them with the Gospel message, so that peace and justice may prevail.”

That commitment to the future of the Congregation and its mission to serve those most in need continues as she assumes her new responsibilities.

An avid genealogist, she has traced her ancestors back to the early 1800s.

Sister Dorothy entered the Congregation in 1956; her religious name was Sr. Thomas Loretta. She attended St. Raymond School in the Bronx, and St. Lawrence Academy in Manhattan; she earned a BA in Mathematics from the College of Mount Saint Vincent and an MA in Theology and Liberal Arts from Manhattanville.